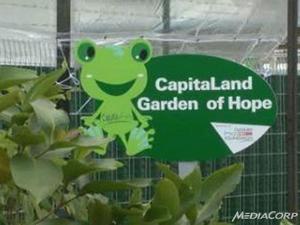 Property developer CapitaLand and the five community development councils (CDC) aim to help 5,000 underprivileged children this year, as part of their outreach effort.

To celebrate its second year of partnership with the CDCs, CapitaLand on Wednesday hosted an education tour for 112 children at JCube in Jurong East Central.

One highlight of the outing was ice skating. While many of the children had never skated before, few showed signs of cold feet.

The children also went on a tour of the eco-friendly facilities at the shopping mall.

Last year, some S$700,000 was raised and distributed to the five CDCs. The money was raised through CapitaLand’s Green for Hope programme.

CapitaLand hopes to raise the same amount this year.

Through the annual recycling initiative, CapitaLand Hope Foundation will donate S$2 for every kilogramme of recyclable waste collected from its participating properties.

Children will also benefit from a programme called My Schoolbag, by CapitaMalls Asia, which provides school supplies and daily necessities.

President and CEO of CapitaLand Group and director of CapitaLand Hope Foundation Liew Mun Leong said, “The council is a very good platform for us to work on. Next year, we’ll probably study how other versions of things can be done. In so far as helping needy children in education, in home and in medical affairs, we’re prepared to help.”

“Both the schools as well as the beneficiaries have given us positive feedback and they’ve welcomed this and they hope the programmes, the schemes will continue,” Dr Khor said.

“We’re also open to continue to look at what else can we do to plug the gaps and ensure that the children’s educational needs are well supported to ease the family’s financial burden so they concentrate on their studies.”

She added that the collaboration between CapitaLand and the CDCs has helped to raise the social mobility of the underprivileged.