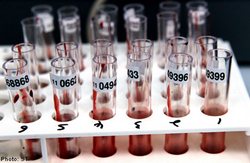 Heroes need not necessarily leap into a burning building or race to a crash site to save lives.

Sometimes the act of heroism takes a much simpler form – like a trip to the blood bank, perhaps.

And this is how Mr Manoharan Ramalingam proves that he is indeed a hero. For nearly 40 years, he has been donating blood regularly at the blood bank located at the Health Sciences Authority in Outram.

“For me, it’s a must. I make sure I donate blood once every three months. It’s a must,” said the 58-year-old Singaporean, who made his 200th contribution on March 15 this year. As if that wasn’t enough, he has been a regular plasma and platelet donor for the last three years. The plasma and platelets donation procedure is similar to that of a blood donation except that it takes a shorter time.

On June 16 – World Blood Donor Day – Mr Ramalingam will be awarded the Medal For Life by the Singapore Red Cross Society. 1,644 blood donors and 36 BloodMobile organisers will be presented with awards in this global annual event for their efforts and contributions to this noble cause.

Mr Ramalingam remembers his first donation in 1972 clearly, as if it happened yesterday. He said:

“I had just joined the army as a regular. I was just a recruit and there was a volunteer blood donation drive. At first, I was scared.”

Encouraged by his then Officer in Command, the young Mr Ramalingam eventually overcame his apprehension and joined the line of soldiers to donate blood. It was an experience that converted him.

“The pain is like an ant bite! It lasts for barely three seconds and after that it’s okay,” he added with a laugh, recalling the relief after that first donation.

However, he turns serious as he points out how crucial that small act can be and adds: “When you realise that it’s about saving lives, the slight pain you feel won’t matter. It’s important people realise that.”

Now a defence executive officer at Singapore Combat Engineers, Mr Ramalingam’s consistent efforts have been recognised already: In 1999, he was awarded the Gold Award, then in 2005 the Diamond Award and in 2007 he got the Champion of Champions Award from then Health Minister Khaw Boon Wan.

According to the Singapore Red Cross website, Singapore’s stocks of Group A and O blood type are generally low. The Blood Donor Recruitment Programme’s head Sherlee Choliluddin noted that in 2011, there were a total of 67,310 blood donors of which only about a third were first-timers. She and her organisation are hoping to have more donors come forward.

Mr Ramalingam, who has tried to encourage his wife and two children to donate blood with little success, says: “I think people are scared or they are just too busy to come forward. I mean, it does take some time in the hospital so I try to get my friends to come along with me. It then becomes like an outing.”

He adds that he feels a sense of satisfaction when he sees those who he has encouraged going for blood donation drives. “I get the young boys at my office to head down to the drives. And then they come back telling me that they got over their fears and would go back again to donate. I feel proud that I had done my part in bringing in more donors,” he said.

According to him, a trip to the blood bank for a donation usually takes about two hours. “They will do a medical examination of the donor before the procedure. You have to answer some questions and they will assess you to make sure you are fit enough to give blood. The blood donation itself takes about an hour,” explained Mr Ramalingam.

And when you ask the youthful-looking man, who makes it a point to keep fit, for his tips to someone who may be considering donating blood, he says: “I’ll tell them to not tense up. Listen to your iPod or try to chat with the nurses. And never look at the needle.

“And, of course, my most important piece of advice: Have a hearty breakfast! That’s really important. I always have a good breakfast before I head down to the blood bank.”