Four-year-old Adlea Ry’Kyla lies sleeping in a hospital bed too big for her, wrapped up in a bright pink Barbie blanket that covers the many tubes snaking from her wrist and the small needle puncture wounds that dot her skinny arms.

She looks peaceful while she rests, but for the little girl, every minute ticking past is time lost – she has only weeks to live if she does not receive a human heart transplant. 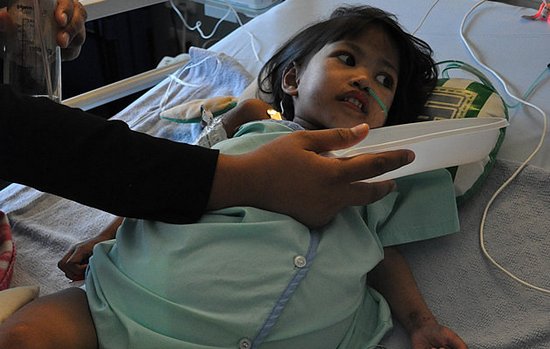 Adlea, affectionately called “Nor” by family and friends, is suffering from dilated cardiomyophaty, more commonly known as “swollen heart” syndrome, where her heart is too weak to pump blood around her body.

As a result, her body traps fluids – leaving her stomach grossly bloated to almost half her size.

“She can’t eat; she will vomit because of her foot infection,” said Nor’s mother, Norleen Osman, 33. “She is in agony, and every night she groans and cries.”

According to Norleen, Nor’s foot infection, a gaping wound the size of a large biscuit, developed when the doctors “ran out of veins to inject on her arms.” A simple injection turned into a full-blown infection and Nur had to undergo another surgery to prevent the wound from growing.

“There’s no cure except for a heart transplant. And we can’t get that here.” said Norleen. She told Yahoo! Singapore that the only chance Nor has of surviving is to receive a paediatric heart transplant in either the United States or Europe, something their family cannot afford.

Norleen and her four children depend on her security supervisor husband’s monthly pay of about $2,200. The cost of such an operation would set the family back by at least $500,000, a sum that they will never be able to raise on their own.

“We try our best to cut down, we’ve applied for Medifund, but there’s not enough money.” said the housewife, whose family of six stays in a two-room rental flat in Ang Mo Kio. She added that they are already receiving financial assistance with Nor’s medical bills through the KKH Health Endowment Fund.

During the course of the interview, she broke down several times as she described her daughter’s ordeal.

“When she sees me crying, she will ask, what’s wrong, was daddy bad to you, why are you crying?” said Norleen, who has been by her daughters’ side 24/7 since her hospitalisation last week. “She’s so strong, we have to hold on and believe that she will live.”

Nor has been in and out of the hospital since she was just five months old and diagnosed with myocarditis, or heart inflammation. She got better, but when she was nearly two years old, a high fever caused another heart infection.

Because of her weak health, she has never had a chance to go to school or make friends, but spends her days resting at home or singing and dancing to Bollywood movies and Barney videos.

“She used to sing and dance and laugh all the time, but now she has stopped.” said Norleen.

Nor’s doctor, Associate Professor and Senior Consultant at KKH’s Department of Paediatric Subspecialties Dr Wong Keng Yean confirmed that there is no heart transplant programme in Singapore for children as young as Adlea.

Norleen has written in to several hospitals in the United States, including the Joe DiMaggio Children’s Hospital in Hollywood. She said the family is now just waiting for a positive response so they can get her the care she needs as soon as possible.

“My fear is that, when they reply saying yes, my daughter will be too weak to even travel over.” she said.

Norleen is appealing to the public for financial help for her daughter.

“If she can fight to live, I will also fight and be strong for her.” she said.

Currently, her close friend, photographer Rima McDonald, is handling all donations at her Little Nur’s Heart Fund site, through which they have raised $10,000 as of last Sunday, and hope to raise $200,000 by the 8th of June.

To contribute and to find out more about the fund, please go to their website here.

This article was first published in YahooSG