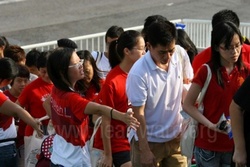 Over lunches and casual meet-ups with youth mentors, both have made improvements, more significantly so for the elder brother, who is now chattier and more willing to share with others, said one of their mentors, Mr Hezron Manurung, 23.

The boys had signed up for Fei Yue Community Services youth mentoring programme in September last year. The Coaching for Excellence (CFE) programme reaches out to youth facing difficulties, whether academically or in other areas of life.

These students come from low-income families and lack proper guidance at home. The programme, coordinated by the TWCC Youth Executive Committee (YEC), seeks to pass on skills and life experiences to these students, as well as “qualities of hard work, self-discipline and never giving up”, said YEC chair Genesis Shen.

By bringing in youth mentors, he added that the programme also seeks to groom “a generation of young people who care about others and who can understand that they live in a community, a society, where people are in need”.

As voluntary welfare organisations shared the good response they have been getting from youth who volunteer as mentors, youth mentors said they simply want to help others.

There are currently 68 mentors from Temasek Polytechnic in the TWCC mentoring programme, which was launched in April 2008. Besides academic help, the mentors, who went through a full-day training programme, also participate in bonding activities with the mentees.

Mentor Jeremy Chua, 18, said he learnt how to build stable relationships, as well as to better empathise, understand and engage. “I also feel happy because I feel like I am helping someone else.”

Another mentor, Ms Wan Wardah, 20, said she was interested in teaching and enjoyed interacting with younger people.

Introduced to Fei Yue’s CFE programme by a friend, Mr Hezron underwent weekly four-hour training workshops for two months before joining the programme in September last year. He said he enjoys helping people and has had some experience mentoring other youth in his church.

Asked what attracts these mentors, Ms Iris Lin, Senior Social Worker at Fei Yue, said the reasons were varied – from “the challenge of engaging other youth” and “joy of reaching out to youths” to simply “the spirit of volunteerism”.

Another youth mentor described his progression from volunteer to mentor as “just a natural thing”.

Mr Victor Huang, 27, had been volunteering with Heartware Network since 18, when he was approached to mentor other volunteers two years ago. He went through a volunteer management programme conducted by the National Council of Social Services (NCSS) Academy and twice headed a 15-member youth committee at the youth charity.

Mr Huang mentored them on how to plan and execute recruitment, training, and deployment of volunteers. “I’m more willing to listen to other people first … Heartware Network has groomed me into a much more confident person,” he said.

For these youth mentors, “the main take-away is they know they’ve done something good, meaningful, they can see the results”, said Heartware Network’s founder, Mr Raymond Huang.

Getting the right mentor

There are times, however, when finding the appropriate mentor becomes a challenge.

For instance, at SPLAT!, a community arts movement helping at-risk youth and ex-youth offenders, one challenge is getting mentors, who often “come from sheltered backgrounds”, acquainted with the different socio-economic backgrounds of the youths-at-risk, said founder Dominic Lim. The group is taking a break for “strategic planning” this year. In previous years, youths from junior colleges and polytechnics would mentor youths-at-risk from secondary schools.

Another challenge is that these at-risk youths often have “trust issues because they come from broken families,” said Mr Lim.

To prevent abuse, SPLAT! does not allow mentors and mentees to exchange handphone numbers, said Mr Lim, as “there’s a difference between mentoring and befriending”. Mentors are also discouraged from befriending the youth on social media and must inform SPLAT! if they do.

The group also has a policy to launch internal investigations but it has never been used, said Mr Lim.

As charities, both Fei Yue and Heartware Network have service and performance guidelines set by the NCSS. The former also sets its own key performance indicators.

A measure of Heartware Network’s success is that its programmes have been running for consecutive years, said Mr Huang. Another key indicator is the increasing volunteer numbers.

The organisation has in place a system of checks and balances, which include “multiple reporting platforms” and a whistle-blowing policy.

Said Mr Huang: “We have to be accountable to the stakeholders like the schools, the volunteers, or even the financial stakeholders.”