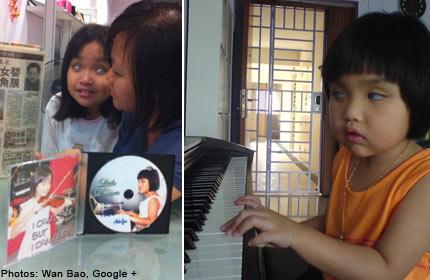 Despite her tender age and being almost totally blind, 11-year-old Adelyn Koh has composed four songs and produced her own album – all in hope that the CD sales will raise the $80,000 she needs for her medical expenses.

Adelyn was born with a rare congenital eye disease called Peter’s Anomaly, which means that she had “opaque” corneas. According to The Straits Times, there are only one to two such cases in Singapore a year.

Unfortunately, all four operations were failures, and she can now only make out colours, light and shadows, Chinese daily Lianhe Wanbao reported.

Her trials didn’t end there, as her father left home two years ago, never to return.

Her mother Mary Koh, 39, a housewife of 10 years, was forced to find work as a tuition teacher to take care of her three young daughters.

Adelyn has never given up hope that she’ll one day be able to see again.

“She has this very high desire – she wants to see what’s going on,” her mother said. At times, Adelyn’s frustration at not being able to see has caused her to lash out, asking: “Why am I the only one in the family who can’t see?”

In a short documentary on her life, she shared how she would like to see, even if it’s just for a year, a week, or “just a little while, even if it does go back to normal again”.

Explaining her wish to send Adelyn for another cornea transplant despite the previous four failures, Ms Koh said: “There is no best gift to be given to her, other than sending her to do the transplant again.”

“According to eye specialist, her vision is now equivalent to zero per cent. No one able to guarantee it will be successful, but there will be totally no hope if we do not try at all,” she added.

Hoping to let her daughter see again, Ms Koh decided to accept the transplant surgery. However, the surgery, scheduled for early November, would set the family back $80,000 – $40,000 for each eye.

With a pay cheque of just $1,500 for a family of four, it was money they could not afford.

Ever since she was young, Adelyn loved to play the piano. At first, she fumbled at the keys, but slowly, using her hearing as a guide, she learnt to sing and even compose songs.

Ms Koh told the Chinese daily that when she sent her daughter to learn the piano, her only hope was to cultivate joy in Adelyn’s life.

Unexpectedly, the lessons helped Adelyn realise her unusual talent – she can play music from memory.

Adelyn only needs to listen to a song a few times to memorise the tune and play it out on the piano.

She has since passed the Grade 4 piano examinations and was even invited to the President Star Charity show to play the piano while singing “The Moon Represents My Heart”.

Her efforts managed to raise $10 million in donations.

For the accomplished young girl who is a capable horse rider, inline skater, ballet dancer and even a violinist, her disability has never stopped her from achieving her dreams.

Now she is hoping that the same talent and determination can help pave her way to regaining her sight. Her music has been published in a CD, with the aim of using the proceeds to cover her medical expenses.

Her CD, titled “Little Dream”, is priced at $20 a copy and has sold 1,000 copies so far through the help of enthusiastic friends and family spreading the word through blogs, Facebook and emails.

Those who wish to purchase the CD can email mary1668@yahoo.com, or go to adelynxinhui.blogspot.com to make an enquiry.

This article was first published in Asiaone.