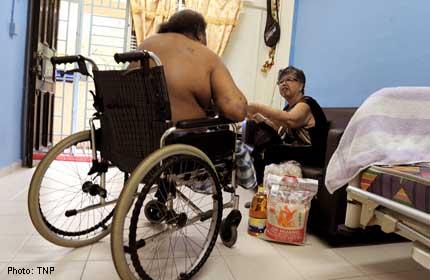 While doing housework one day, she got a phone call that changed her life.

She was given only five minutes to decide whether to accept a kidney from a brain-dead donor.

Since then, the retired statistical assistant has been able to have a life free from dialysis.

Miss Yew has now become a volunteer with the National Kidney Foundation (NKF) and helps out in its Grains of Hope programme.

She distributes food items – 5kg of rice, 3kg of beehoon, 2 litres of cooking oil and a S$60 supermarket voucher – to needy kidney patients once every two months under the programme.

She will also be helping out at the NKF’s first ever fund-raising carnival at Marina Barrage this Sunday.

She said: “I’m happy that I can help now that I’ve retired. At least I’m doing something, even though it is just a small contribution.”

Fifteen years have passed since the life-changing call on May 11, 1997 – a day that remains etched in Miss Yew’s memory.

It was Mother’s Day.

As fate would have it, a mother had been killed in a traffic accident.

The 50-year-old housewife’s son was taking her on his motorcycle to see a doctor when they were knocked down. The son was slightly hurt, but his mother died from serious injuries, Miss Yew recalled.

A Lianhe Wanbao report, dated May 10, 1998, said that the victim’s husband, then 52, and son, then 21, gave consent for the removal of all organs from her for donation. And one of her kidneys went to Miss Yew.

“I’m very touched that I got this kidney. The day I received the transplant was the day my life changed. I got a second chance at life. I’m eternally grateful to my donor,” said Miss Yew.

“I asked the transplant coordinator whether I could meet the donor’s family. The answer was ‘no’.”

She found out who her donor was only a year later from the reporter who had interviewed her, she said.

Miss Yew knew something was wrong with her body when she was in her early 20s.

“I was very active in school, playing sports. But on and off, I would get blood in my urine. When I went for a check-up, they told me that it was renal tuberculosis.”

Her kidneys were functioning at 80 per cent at the time, but they started deteriorating rapidly when she was 34.

She thought she could have caught the bug from her grandmother, who had lung tuberculosis (TB).

Renal physician Akira Wu, 62, said that renal TB is usually associated with either active lung TB due to germs spreading in the blood stream or a reactivation of old TB in the lungs.

He said that it is extremely rare for someone to contract renal TB from the environment and that it usually affects people with immunity deficiencies.
Click here to find out more!

By the time Miss Yew was 37, her kidneys had failed completely and she had to go on dialysis.

She said: “Those were dark days. It was very demoralising because every other day, you were reminded that you were sick.

“When you go to the toilet and you hear the sound of someone peeing, it can make you cry because you can’t do it.”

She could take only a certain amount of fluids each day.

Having experienced first-hand what a kidney patient has to endure, Miss Yew said she could understand why “kidney patients are so grouchy”.

She hopes that kidney patients who are waiting for a donor will be able to get one and advises them to stay healthy in the meantime.

“If I wasn’t fit at the time, I wouldn’t have got this kidney. So you must keep yourself healthy. Even if there’s a (kidney) for you, you must be healthy to receive it,” Miss Yew said.

“Look on the bright side – the day will come for you.”