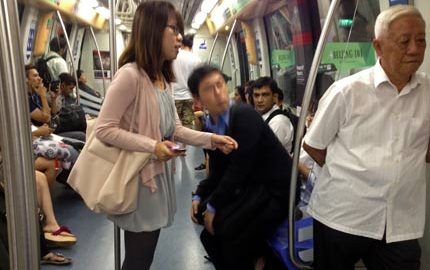 Let’s say you’re on a crowded train and somebody is occupying a priority seat.

Along comes a pregnant woman.

What would happen if you tapped the man on his shoulder to give up the priority seat?

Would he budge or get angry?

Going by postings online, he would get angry. And going by pictures posted online, everyone occupying a priority seat is either brutish or selfish.

The New Paper decided to conduct an experiment over two days and five hours of the morning and evening peak hours.

The result: Without hesitating, six out of 10 commuters gave up their seats, reserved or not, on packed and not-so-packed trains, to the elderly, the pregnant, and those with toddlers.

And even when the crowd in the train cleared, people were conscious of leaving the reserved seats empty for those who really needed it.

A handful needed a gentle reminder before they gave up their seats. But by and large, train commuters appear to be a civil lot.

We started at 5pm last Thursday at Chinatown MRT Station on the North East Line, a common meeting point for the elderly.

The train was packed. All the seats were taken and there was little standing room.

On one of the priority seats was a middle-aged lady talking on the phone.She sprang out of her seat the moment she saw the three elderly women board the train.

The man sitting opposite on another priority seat, however, needed a nudge.

His eyes had darted around at the sight of the old women, but he turned his attention back to his smartphone anyway.

“Excuse me, do you mind giving up your seat to that lady over there?” we asked, tapping his knee gently.

The guilt on his face as he jumped out of his seat was classic – like he had been caught red-handed for doing something wrong.

We decided to try our luck on a man who was not occupying a priority seat just to see if he too would oblige. He did.

So in the end, all three old ladies got their seats, with a little nudging on our part, in less than five minutes.

At about 6pm on the same day, we took a train heading towards HarbourFront. We spotted a smartly-dressed man who looked like he just had got off work.

In true Singaporean ninja style, he sped towards the only available seat, the priority seat, and settled down.

An elderly man, on the other hand, wandered towards the advertisement board near the train door, and leaned on it for support.

The train was not as packed, but there were no available seats. We were apprehensive in approaching the man, now shaking his legs comfortably, to give up his seat. But he immediately stood up, apologised, and sheepishly said: “Sorry, I really didn’t see him.”

Then, he alighted and disappeared into the peak-hour crowd at Chinatown station.

We also tried our experiment from 9 to 11am on the morning crowd last Tuesday and switched to the North South Line, where we found a slightly hunched old woman holding onto the handrail, staring intently at the row of fully occupied seats.

We spotted a young woman in a pink baggy sweater and leggings. She certainly looked like she could do without the seat.

When we directed her attention to the old woman, she stood up even before we could finish.

When asked why she did not give up her seat initially, Ms Angelyn Teo, 30 said she didn’t see the old lady at all.

“I don’t mind giving up my seat. But actually, I am also pregnant,” she said. “I do give up my seat when I see people who need it more than me though. It’s just that I couldn’t see (the old lady),” she added. Oops.