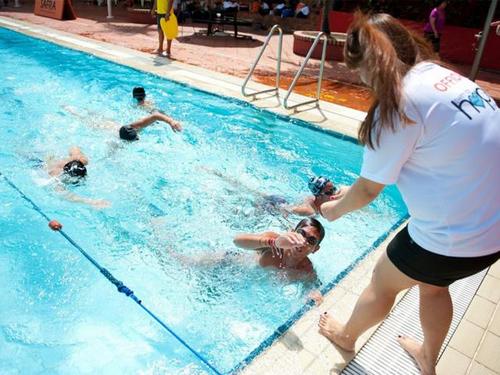 More than 320 national servicemen and swimming enthusiasts helped clocked a total of 21,898 laps at the SAFRA Swim for Hope 2012 event held on Sunday afternoon.

The feat has earned a place in the Singapore Book of Records for the most number of laps swam in six hours.

Organised by SAFRA Tampines for the second time, the event also raised S$20,000 for the Children’s Cancer Foundation.

The funds will help facilitate the continued provision and improvement of various programmes and services for the Children’s Cancer Foundation beneficiaries and their families.

This year, the Hydro Chain Challenge was introduced for the very first time to promote bonding among NSmen, recognising their efforts and contributions to National Service.

A total of eight teams battled it out at the swimming pool to see which team could retrieve and don on the Singapore Armed Forces Number Four Uniform in the fastest time possible.

The challenge was a test of teamwork between the team members, allowing them to foster greater ties and bond with each other.

Mr Tommy Ang, club manager of SAFRA Tampines, said: “We are heartened by the overwhelming response to this charity event and would like to thank the NSmen and their friends who have participated for their efforts and hard work.”

The top three swimmers who swam the most number of laps walked away with more than S$440 worth of prizes.