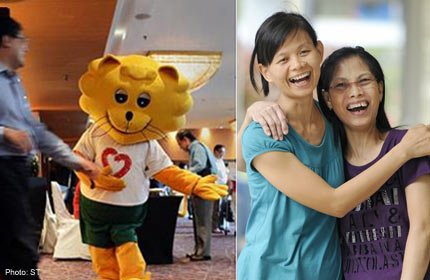 When Professor Tommy Koh, Singapore’s ambassador-at-large, asked the 500 people in the room if they had questions, many made a bid for the mike.

The enthusiasm was understandable. The topic was kindness and everyone had something to say about grace and compassion, or their lack, in Singapore.

One man wanted to know why polite and kind children turn into mean and unkind adults.

A Methodist pastor said bureaucracy can be a stumbling block to kindness if government departments do not respond to civil groups trying to help the vulnerable such as foreign workers and stray animals.

And one architect launched into a rant about inconsiderate Singaporeans who do not return food trays and the need in this country to do away with demeaning jobs such as cleaning.

The animated proceedings of the second National Kindness Conference yesterday confirmed one thing: Singaporeans are starting to get a little antsy about the state of kindness in the Little Red Dot.

Eavesdropping on the chatter and conversations, one got the distinct impression that those who came – corporate and community leaders as well as ordinary people – all believed that, as a nation, Singapore is a lot less nice, gentle and kind than it used to be.

“Maybe we have become so caught up with our fast-paced lives and so focused on achieving goals and results that we are no longer socially conscious. When parents are like that, their children turn out the same way too,” said Ms Trudy Loh, deputy director of the Language Council’s Secretariat.

Interestingly, what was also obvious was a widely shared view that something needed to be done to right this wrong.

Prof Koh, the keynote speaker, set the tone with a provocative address asking: “Are Singaporeans a kind or unkind people?”
Then he set out signs of meanness and signs of kindness.

Madam Moliah teased the audience by asking if there’s a racial dimension to kindness and if Malays are kinder.

For the record, she doesn’t think so. She believes people’s values are shaped by their world views.

The crowd was in a buoyantly discursive mood when everyone broke up into small group discussions. The doodler, the yawner, the listless participant – all were conspicuously absent.

The teaser was: “What can we do to help build a more gracious society?” There was no lack of ideas.

One group suggested getting students to start “a gratitude journal”. Another lobbied for the media to use more sensitive language – such as “differently abled” instead of disabled, “domestic workers” instead of maids – in describing certain groups, while yet another pushed for action against cyber bullies.

Dr Wan said he hoped the conference would be a connector and catalyst and spur participants to organise and mobilise activities to promote kindness.
Ms Jennifer Yin of the National Library Board was struck by the hope she felt.

“People were more than willing to participate. This is an issue really close to our hearts,” she said.

“There was a consensus that we needed to do something about it, that it was our responsibility and we cannot just leave it to the Government.”

Detractors will say talk is cheap.

“If you don’t talk about it, you forget about it. So this is a good reminder,” he said.

He added: “Muslims go to the mosque on Friday, Christians flock to church on Sunday to listen to the same philosophy and values. We already believe and this may seem like preaching to the converted, but it’s always good to get inspired again.”

This article was first published in The Sunday Times