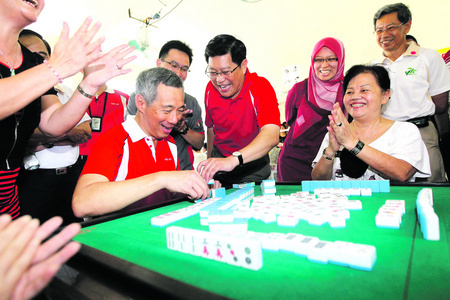 Be it donating a packet of biscuits or a can of sardines, residents in Jalan Kayu are encouraged to give within their means to help the needy.

Under the Jalan Kayu Care and Share initiative, which was officially launched yesterday by Prime Minister Lee Hsien Loong and the ward’s Member of Parliament Intan Azura Mokhtar, residents can choose to pledge donations for a period of six months or to give one-off donations.

So far, the donated items include rice, cooking oil and canned food.

The programme was started in June and, according to Dr Intan, 120 families had come on board as donors while 200 other households have benefited from the donations.

The items are collected and distributed by volunteers, who include students from the schools in the vicinity such as Mayflower Secondary and the Institute of Technical Education College Central.

Noting the “ground up” approach, Dr Intan said she hopes that the initiative will be self-sustaining.

“With each making their own little contribution, collectively we would have substantial resources on which we can draw upon and redistribute, and help those who are in need,” she said.

When the beneficiaries no longer need assistance, they can pay it forward and help others as well, Dr Intan added.