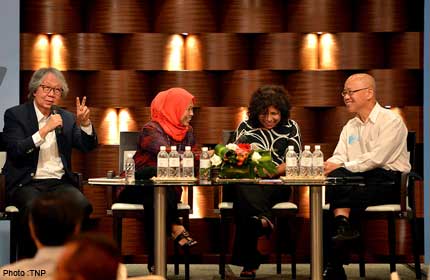 He stood in front of a young woman, hoping to catch her attention.

When she stopped fiddling with her smartphone and finally looked up, he gave her a smile. The woman smiled in response, then promptly glanced back at her phone.

All this time, the woman was on the priority seat in the MRT.

When they both alighted at City Hall MRT station, Dr William Wan, general secretary of the Singapore Kindness Movement (SKM), decided to ask her why she had hogged the priority seat.

“She told me that she didn’t know I was a senior citizen,” the sprightly 64-year-old said with a chuckle.

“Don’t assume that the person is unkind when something like that happens.

“Instead, I assume he is either not aware, self-absorbed, or too preoccupied with what he is doing,” he said.

During the National Conference on Kindness on Saturday, the general consensus was in line with the findings of TNP’s social experiments on graciousness – that we are by and large a gracious society. “There are still lapses. There are still areas of unkindness. But on the whole, we are essentially kind,” said Dr Wan.

With regards to these lapses, he suggested setting up a norm.

“Singaporeans should take ownership of values such as respect for the elderly, so that people will give up their seats even without the enforcement of the priority seat,” he said.

So could it be a case of social media amplifying ungracious acts while ignoring the kind ones? Public Hygiene Council chairman Liak Teng Lit, who was present at the conference, even called some netizens “howling monkeys” who hid in the canopy, screaming and throwing branches at people.

“They don’t make good things happen. They just make a lot of noise.

“They are of no consequence, if you ask me. They are a waste of time,” he said.

Still, this doesn’t mean that ungracious acts are few and far between.

Mr Kevin Foo, 40, who works in property investment, felt strongly enough about the ungracious acts here to write a book about it.

Having lived and worked in London for seven years, he found the ungracious acts he has seen since returning to Singapore in 2010 even more apparent.

His book features 70 ungracious acts that are common here. The book is now available at the SKM Gallery for $12 and will hit major bookstores in the third week of November, at a cost of $15.90. “It was easy coming up with the first 50 ideas (of ungracious behaviour),” he said.

But there are signs that Singapore is working towards becoming a gracious society. The tray-return system, for instance, is making a comeback.

Mr Quek Bai Feng, vice-chairman of the Keep Singapore Beautiful Movement (KSBM) Youth Committee, thinks that it will work this time as it is a combined effort by KSBM, SKM, and the National Environment Agency. He said that a trial of the tray-return initiative at Tiong Bahru Market in June this year had been successful.

The 20-year-old, who is serving national service, said: “Many people were willing to return their trays upon being asked. The way to go forward is to positively encourage people to do it.”

In his speech at the conference, keynote speaker Professor Tommy Koh said: “We should stand up against the minority of selfish people who oppose dormitories for foreign workers, hospices, facilities for the elderly in their neighbourhood.

“They are the minority, and we, the majority of kind Singaporeans, should raise our voices to drown them out.”

Perhaps Mr Liak would know best – after all, he is known for speaking up whenever he sees an ungracious act.

He got into this habit about 30 years ago and can even provide statistics of his success rate. “Out of every 20 people I tell, about 10 to 12 will accept it. A few will give me an angry look and just walk away.

“Then there will be one out of 20 who will say ‘Who are you to tell me what to do?’ They will challenge me,” he said.

When asked how he manages to tell a complete stranger to be considerate on the streets and even in the toilets, Mr Liak shrugged.

He deadpanned: “Just do it.”