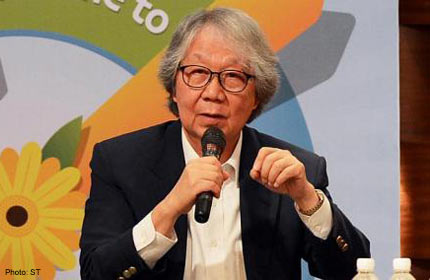 Most Singaporeans are kind, but people can still aspire to be kinder to all who share the places where they work, live and play, Ambassador-at-large Tommy Koh said yesterday.

There are certain areas that the public can work on to create a gracious society, he added.

For example, Singaporeans could be nicer to the elderly, the disabled, foreign workers and one another. Bosses could also be kinder to their employees by respecting work-life balance and practising profit-sharing.

Professor Koh, the rector of Tembusu College at the National University of Singapore, also called on the public to “stand up against the minority of selfish people who oppose dormitories for foreign workers, hospices, facilities for the elderly in their neighbourhood”.

“Let the voices of the majority of Singaporeans who are kind rise above those of the unkind minority,” he said.

His assessment was made during a keynote speech at the National Conference on Kindness at the Marina Mandarin Hotel.

Prof Koh came to his conclusion after presenting evidence which supported opposing views on the question of whether Singaporeans are kind.

His speech was followed by a 45-minute forum attended by about 500 people, including students and business owners.

The conference, the second held to date, was organised by the Singapore Kindness Movement (SKM) and aimed at encouraging Singaporeans to discuss and reflect on ways to help one another show simple acts of graciousness and generosity.
Audience members posed questions to SKM general secretary William Wan, Madam Moliah Hashim of Malay self-help organisation Mendaki and Ms Braema Mathi of human rights advocacy group Maruah. Prof Koh was the forum moderator.

The questions were wide-ranging and included topics such as how to teach kindness in schools, getting Singaporeans to clear their trays in hawker centres and giving maids annual home leave.

Senior Minister of State for Education Lawrence Wong, who attended the conference, said: “Translating our values into action takes effort.

“It requires personal commitment and discipline to practise the right behaviour, so that over time, we get into the habit of kindness.”

At the end of the three-hour event, Dr Wan said he was encouraged by the strong turnout and spirited discussions.

He urged the audience to show acts of kindness in their daily lives so that others can be inspired to act graciously too.

Audience members said they found the conference useful because it reminded them that simple gestures of kindness can make an impact on the lives of others.

Mr Manoj Sharma, who runs a company that provides service-related courses, said: “I was reminded to show kindness as a boss.

“I can do this by stepping up to cover the responsibilities of my employee if he has urgent family matters.”