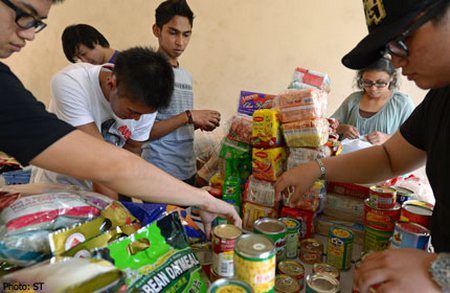 With her son suffering from autism and herself plagued with ailments, such as diabetes and high blood pressure, single mother Khoo Bee Teen struggles to make ends meet.

Madam Khoo, 58, takes care of her 24-year-old son’s every need, and has to take him for regular psychiatric treatment at the Institute of Mental Health.

A housewife, she depends on monthly cash handouts of $400 from her three sisters to get by.

Madam Khoo and her husband were divorced in 2009 because of his gambling issues.

But people like her will benefit from the launch of a new Care & Share programme where she is helped by her neighbours.

The programme is spearheaded by the Jalan Kayu Citizens Consultative Committee (CCC) and is timely in the face of the uncertain economy.

Singapore narrowly missed a technical recession as numbers for the second quarter were upgraded to register a 0.2 per cent growth in gross domestic product instead of the contraction indicated by flash estimates.

But the Monetary Authority of Singapore predicts that growth will remain subdued for the rest of the year, with the economy shrinking 1.5 per cent in the third quarter, compared with the previous three months.

Other recent programmes to help the poor include the launch of a new foundation by Keppel Corporation last month. It gave $6.7 million to three educational institutions to support their programmes to help underprivileged students.

The new Care & Share programme involves a donation of groceries – such as biscuits, canned food and instant noodles – from residents every month. They will then be pooled together and redistributed to needy families living in the same area.

The CCC hopes to maintain the programme for at least a year before reviewing it.

Dr Intan, the MP for the Jalan Kayu ward, said the programme is meant to be self-sustaining and give residents a way to “show empathy and to extend assistance beyond their own families”.

For Madam Khoo, the programme means she can save money otherwise spent on basic necessities. “I can spend the money I have on (my son’s) medical bills instead,” she said.

This article was first published in myPaper