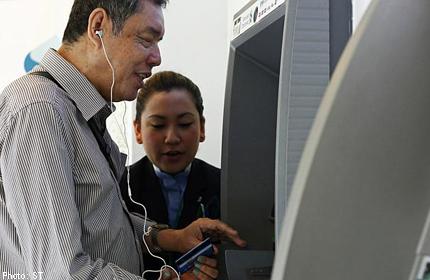 Mr Cheok Cheng Ann, 65, is blind and has memorised the precise points on an ATM touch screen near his Katong home.

“I have to learn the positions by heart and be very careful when pressing the buttons for a transaction, or I could make a mistake,” he said.

A “talking” ATM in Upper Thomson will now make the process of banking slightly easier for him – and other visually impaired people.
s
Launched yesterday, the Standard Chartered Bank ATM with an audio function allows visually impaired customers to perform banking transactions, including withdrawing cash and checking bank balances.

After trying it out yesterday, Mr Cheok, who is married with three sons, said the ATM was extremely easy to use, though he is unlikely to use it daily since it is located too far from his home.

“It makes life so much easier. It has become like child’s play,” said Mr Cheok, who sells fertilisers from his home.

The audio guide begins when customers plug their personal earphones or those provided at the bank into the ATM.

They can then listen to an automated voice that will guide them through their banking options.

Users select options using a number pad without having to navigate the touch screen, and may choose to have a blacked-out screen for privacy.

Similar ATMs equipped with audio options are already available in countries including the United States, India and China. In Singapore, visually impaired people say they do most of their banking over the phone or on the Internet. Others enlist the help of friends and family when they need to use ATMs.

It is unclear how many people here are visually impaired. The Singapore Association of the Visually Handicapped (SAVH) has about 3,300 members.

The new ATM is located at the StanChart branch in Upper Thomson, near SAVH in Toa Payoh.

StanChart said it had taken in recommendations from the association in planning the features of the ATM. The bank plans to introduce two more such ATMs in the future.

SAVH president Phillip Lee said he was appreciative of the bank’s effort to design an ATM specially for the visually handicapped.

“This will allow our clients to become more independent and make banking convenient for them… We hope that more of such ATMs will be installed across Singapore.”

Mr Dennis Khoo, StanChart’s head of consumer banking in Singapore, said the ATM was a way for the bank to be more inclusive and to give visually impaired customers better access to their bank accounts.

Other banks, including DBS Bank, have tactile keypads but do not offer audio guides at their ATMs.

Ms Serene Ng, 43, a Yishun resident who is visually impaired, tested the ATM yesterday and said such ATMs would encourage her to be more independent.

“Previously, I would only head to the ATM with my husband so he can help me. I can’t see people behind me so I’m a little cautious.”