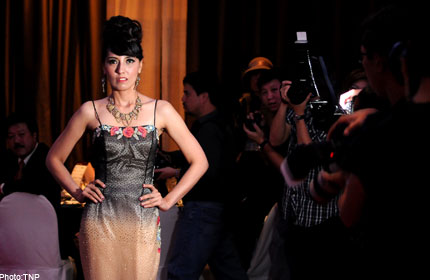 Jungle training and military exercise are what she does on the job.

She is, after all, an officer with the Ministry of Defence (Mindef).

But what her colleagues do not know is that she is also a former beauty queen.

On Saturday, she and 13 other models from three countries strutted their stuff to do their part for charity.

To create awareness of children and adults with autism, 14 models, who are mostly beauty pageant title holders, took part in a fashion show presented by local designer Hayden Ng and Courts + O’Connors & Friends at an annual charity party.

It was held at Laguna National Golf & Country Club.

Most of the models flew in specially for the event from Malaysia and Thailand to help the cause.

This year, all proceeds raised from the party, which also included a silent auction, will go towards the Eden Centre for Adults and Eden Children’s Centre that are both under the care of Autism Association (Singapore).

The Eden Centre for Adults promotes the welfare and acceptance of adults with autism.

The children’s centre caters to the needs and develops the potential of each child by providing individualised educational plans.

Ms Kaur, who works at Mindef, says she is normally a plain Jane who doesn’t wear an ounce of make-up at work.

She declined to say what she does exactly, saying it was confidential.

But she did reveal was that she does field work like jungle training and participates in military exercises.

She said her colleagues do not know of her titles and she usually tries to keep a low profile.

But when it comes to such charity events, out go the green camouflaged fatigues, face paint and boots, and in come the glamorous dresses, high heels and thick make-up.

She told The New Paper: “I want to do whatever I can to promote the awareness of autism here, especially since I have volunteered with autistic children and I know they need a lot more resources.”

The charity party, which has been held since 2001, has mainly supported children’s organisations like Mainly I Love Kids (MILK) and The Spastic Children’s Association of Singapore.

But this is the first time that models from three countries have been brought together to do a fashion show for this event.

Before she was crowned, the National University of Singapore graduate worked as a special needs behaviour therapist for three years.

She taught autistic children life skills like how to feed and dress themselves.

“It was all about teaching them to be independent,” said Miss Lim.

She didn’t hesitate when asked to volunteer her time for the event.

Dressed in Mr Ng’s gorgeous creations, the models were more than happy to do their part for charity.

Mr Ng said: “People often have the impression that models are vapid, but it is clear that these models all have one thing in common and that is the passion to contribute to society.”

“I want to do whatever I can to promote the awareness of autism here… I know they need a lot more resources.” – Ms Inderpal Kaur, Mrs Singapore World 2007 who is an officer with Mindef