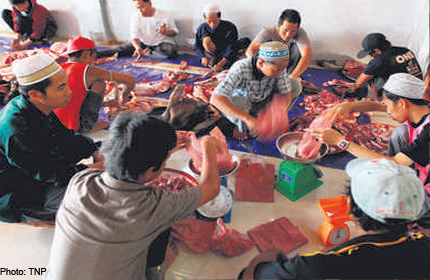 She hopped on a ferry to Batam the day after Hari Raya Haji to perform the religious act of korban (annual sacrifice ritual) in accordance with the Islamic faith.

And this was not her first time doing so.

Ms Norsidah Md Saman, 48, a senior library officer, has voluntarily been gathering Singaporeans who want to conduct the sacrifice on the nearby Indonesian island for the past three years.

On Saturday, she went with four other Singaporeans to Batam to oversee the sacrificial process at Yayasan Pasentren Al-Fateh, a boarding school.

But why head overseas to conduct this ritual? For the satisfaction of being able to feed the poor, said Ms Norsidah.

“There are many orphans and poor people at this place,and eating meat is a luxury for them.

“Their daily meals for the whole year usually consists of just rice, vegetable and salted fish. Seeing their joy at having the opportunity to eat meat really puts a smile on my face,” she said.

Last year, she managed to get Singaporeans to sacrifice a total of 69 sheep and two cows to be distributed in Batam.

She said she created awareness through word of mouth and via e-mails to friends and family.

But due to her busy work schedule this year, she did not spend much time promoting it. Still, she managed to sacrifice six goats, which she said can feed around 350 orphans at the boarding school.

The cost of carrying out the sacrifice in Batam is significantly cheaper compared to Singapore.

This year, the cost of sacrificing a sheep in Singapore, according to the Singapore Mosques Korban Committee, is $465. As sheep is not available for sacrifice in Batam, goats were used instead at a cost of $220.

Singapore managed to import 2,200 sheep from Australia this year after initial reports that the korban ritual might not take place.

All sheep were sold out within five days of korban registration.

But Mr Omar Maulana, 61, a religious teacher, said that the rising cost and lack of sheep here are secondary factors for overseas sacrifices.

Mr Omar, who has voluntarily arranged overseas sacrifices in countries like Vietnam and Indonesia for the past 20 years, told The New Paper that Singaporeansdoit mainly to feed the poor.

This year, he arranged for the sacrifice of four cows and one goat to take place in Kuala Tungkal, in Jambi, Indonesia, at Pasentren Raudhatus Salaf, which houses 400 orphans.

He said: “We have poor people in Singapore too, but despite their financial situation, they still get to eat meat quite often.”

But Mr Omar did acknowledge that the lack of sheep arriving here did push more people to carry out their sacrifice overseas.

He said: “There are people who wanted to do it in Singapore. But because of earlier reports of having no korban this year and later when all the sheep available were sold out, they had to find alternatives in other countries.”

Madam Jamillah Shareef, 59, a housewife, paid $265 to sacrifice one goat in Kuala Tungkal, having visited the boarding school last year.

She said: “I have no problems paying for the sacrifice here, but I just feel that my money spent in Indonesia is more worthwhile because I am able to feed people who need it more than us.

“It was saddening to see the level of poverty when I was there, so it makes my heart happier knowing that I am doing something to help them.”

Muslims worldwide celebrate Hari Raya Haji to mark the end of the annual haj pilgrimage to the holy city of Mecca.

Sheep, goats, cowsand camels are offered for slaughter in accordance with Islamic rites to commemorate Prophet Ibrahim’s obedience to God.

The meat of the sacrificed animal is usually distributed among the needy, families and friends.