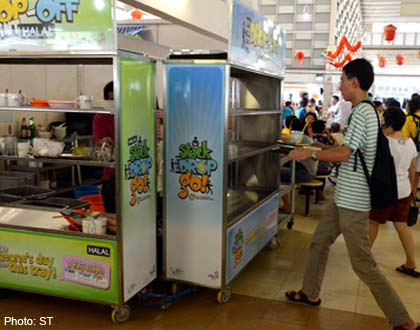 For every tray cleared at the West Coast Hawker Centre, $2 will go to an education fund for children in low-income families in the South West district.

The hawker centre is the first of nine hawker centres which will pilot this tray return initiative. This is in conjunction with the National Environment Agency’s (NEA) South West Clean and Green Singapore 2013 Carnival

Mayor of South West district Dr Amy Khor, who hosted the event, said, “Cleaning up after yourself, including returning soiled crockery and utensils at hawker centres after a meal can be considered as basic courtesy and graciousness and should become second nature to all of us.”

Volunteers will be at the hawker centre during lunch hours on weekdays and breakfast hours on weekends for the first week. They will encourage customers to clear their crockery and trays at drop off points and hand out magnets to patrons who return their trays.

For every tray returned, ExxonMobil will donate $2 (capped at $5,000) to Kids-Up @ South West, which provides financial support to children from low-income families who are entering kindergarten. Volunteers will be counting the number of trays returned.