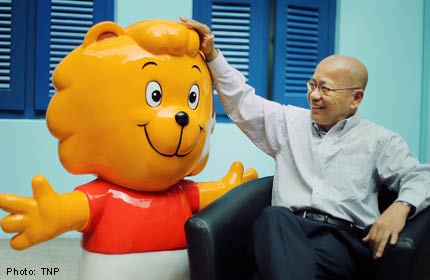 He was strolling in New York with his wife on a cold winter day last year when his phone rang.

It was a call from the then Ministry of Communication and the Arts (Mica), requesting to meet him about a job offer.

Back then, Dr William Wan, 65 now, was on the brink of retirement. But that call kicked off a new chapter in Dr Wan’s life – as the general secretary of the Singapore Kindness Movement (SKM).

Before wearing the hat of SKM’s general secretary, Dr Wan dabbled in different professions. He was a lawyer, pastor, academic and a psychometric analyst. He also has graduate degrees in law, philosophy, religion and theology.

When asked to choose the profession he prefers the most, he said he couldn’t decide.

He said: “I live my life in chapters… I have a philosophy – we only pass this world once. Whatever I can do, and do well, I will do to my utmost.”

The move into SKM was not planned, said Dr Wan.

Early last year, he had considered retiring overseas from law and his psychometric analysis firm, where he spent more than 20 years.

He had wanted to spend more time with his family who live in North America, especially his grandchildren.

And when The New Paper visited him at his cosy and neat office at the Old Hill Street Police Station last week, he proudly showed us passport-size photos of his three grandchildren, aged between 13 and 16.

But that phone call from Mica changed his mind.

With his previous experience, he thought he was a good fit for the job after assessing his own strengths.

“To me, it is not about careers or making money. It is about being useful and since I can help, so I said, ‘Okay, I will give it a shot’.”

When asked if it was true that he was offered the job because he had a “kind face”, Dr Wan laughed heartily.

He joked about the above at a presentation titled “Kindness and Happiness” at the Nanyang Technological University in March.

Then, in a more serious tone, he said: “I am an optimist. I believe in the good in people. I am a ‘people person’ and I can communicate well.”

At the National Conference on Kindness last month, Dr Wan had told TNP in another interview that he thinks that most Singaporeans are kind.

Now, as a general secretary at SKM, Dr Wan works long hours every day, but he is not complaining.

His day begins at 5am, when he does some reading, thinking, writing and exercising.

He is usually in his office by 8am and is one of the earliest. He is usually also the last one to leave, at about 7pm.

“Before you think that I have no work-life balance, I always believe that if you enjoy what you do, then time passes very fast,” said Dr Wan.

It also helps that his office is pleasant, with a small window that overlooks lush greenery. The bookshelves are filled with diverse book genres, including fiction by Haruki Murakami and Catherine Lim and autobiographies.

A beautiful vintage transistor radio sits at a corner.

But Dr Wan does not just sit comfortably in his office all day.

Ever since he joined the SKM, he has been taking public transport regularly. He said: “I wanted to have a feel of what is really out there, so that what I do or say is not just theoretical.”

The lack of graciousness on public transport is constantly one of the top complaints of Singaporeans, according to results of the SKM Graciousness Index 2012.

Nonetheless, Dr Wan thinks that graciousness on MRT trains is improving. He also acknowledged that overcrowding could be a reason for tempers flaring on trains.

He said: “It also depends on the timing. During the rush hours, it is packed and most of the seats are taken. Unless you ask, or you are standing close to the person, it is hard for people to give up (their seat) because it is so crowded.

“But I do think that when it is not too crowded, people do give up their seats to the elderly and it is a good sign.”

When asked who inspired him to do the work he does, Dr Wan mentioned evangelical Christian author Joni Eareckson Tada, who is his age.

She is a quadriplegic who was paralysed from the shoulder down as a teenager.

“I think that people who go through life overcoming great difficulties can be very kind because they understand what it means to suffer,” said Dr Wan.

Dr Wan is satisfied with the current chapter of his life.

He said:”I am already at the other end of my life. I will do what needs to be done. As long as I am useful, I will be here.”