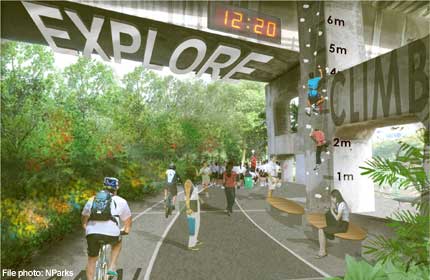 Taking a walk in the park with the elderly may not sound like a typical student-volunteer activity, but that is one of the options available under the new Nature Cares programme of the National Parks Board (NParks).

The programme partners staff from corporations with student volunteers to reach out to community groups, such as the elderly or children with special needs, through nature-related events.

Activities range from community gardening and nature walks to in-line skating and art and craft with plants. The programme calls for a minimum one-year commitment from both organisations and schools to their beneficiaries.

Dr Leong Chee Chiew, NPark’s deputy CEO and commissioner of parks and recreation, said it wanted to “connect corporations, children and the community in a sustained and structured platform”.

Speaking at the launch at St Theresa’s Home in Upper Thomson on Tuesday, he said he hoped the programme would reap the benefits that nature can bring.

He also noted that while the rate of volunteerism has risen, young working adults form the lowest percentage of volunteers. This programme would change that in years to come, he believed.

President Tony Tan Keng Yam, who graced the event, commended NPark’s efforts. He said the plan, which begins its pilot run in January, “not only introduces the residents of St Theresa’s Home to a fun activity, but also gives them some companionship”.

Already, it looks like it will be a success. Madam Bertha Hang, 64, a resident of the home since 2004, described the morning event with the students and volunteers as a “very nice and wonderful experience”. She said: “I like nature, plants and animals. I like to admire the plants.”