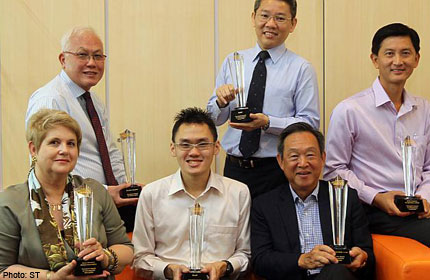 A group that taps young people to help other young people has clinched one of the nation’s most prestigious accolades for volunteers in the social service sector.

The group called Splat! is made up of some 800 youth volunteers who guide ex-offenders and young people at risk of getting into trouble to produce artworks and musical performances.

Said Mr Dominic Lim, 25, who leads the six-year-old Splat!: “Youths can relate better to one another and have more flexible schedules.” He is a senior executive at the National Council of Social Service.

In a speech at the award ceremony at Marina Mandarin Singapore, Dr Tan encouraged the recipients to share their experiences with other Singaporeans so that “giving becomes part of the DNA of our society”.

A new category – the President’s Award for Social Impact – is launched this year to recognise the impact of non-profit organisations on the community. The award went to St Luke’s Hospital, one of the pioneers in providing home-care services and caregiver training in the early 2000s. Its extensive network of outpatient clinics, day rehabilitation centre and home-care services enables patients to continue to receive care after being discharged.

The chairman of the National Volunteer and Philanthropy Centre (NVPC), Mr Stanley Tan, said people are giving more, in both small and big ways, because they want to play a role in changing the life of someone in need. “The needy are not invisible outcasts just looking for handouts but fellow citizens we partner,” he added.

It is this belief in the innate dignity of every human being that led Mr Lim from Splat! to support young people at risk and former youth offenders to pursue their interests and aspirations, such as being a radio deejay or starting a band, that may be frowned on by parents or teachers.

“The key is getting them to feel that they are good at something so that they gain confidence and become more engaged in life,” said Mr Lim.

At the ceremony, Dr Tan also launched an initiative to collect the memories and stories of people who have sought to do good.

The I Remember Doing Good initiative was started by the Singapore Memory Project in collaboration with NVPC.

One story from the initiative that Dr Tan shared with the audience last Wednesday night was that of the late Venerable Ho Yuen Hoe, founder of Man Fut Tong nursing home.

Despite being penniless and illiterate when she arrived in Singapore in the 1930s, she later started a nursing home that now has more than 220 elderly residents.