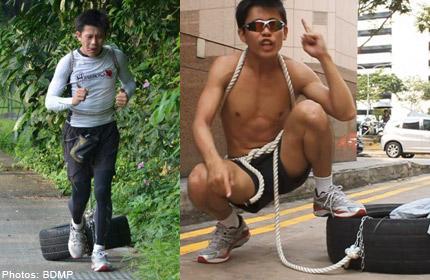 How far would you go to raise money for charity? Would you strap a tyre to your body and run a marathon?

As crazy as it may sound, that’s exactly what 30-year-old ‘Ah Siao’ plans to do for the Singapore Bone Marrow Donor Programme (BMDP).

Never having run a marathon before, the unintelligible Singlish-speaking, Hokkien-expletives spewing online persona has announced that he plans to run the full 42km Standard Chartered Marathon with a tyre weighing approximately 10kg tied around his chest.

“Raise money, raise awareness. For peeeple who no hope. FIght marathon 1 on 1. Drag marathon to run tyre. Bo ji mai lai ah (don’t try if you have no guts)!” is his battle cry on his Facebook page.

Curious passers-by may have spotted him in the past four weeks. He has been out five days out of seven with his ‘best friend’ dragging along behind him to train for the event, which falls on Dec 2.

Pictures of him dragging the tyre have popped up on forums and even citizen journalism website Stomp, with netizens expressing curiosity as to what this ‘madman’ is doing.

But it’s no act of madness. Ah Siao is raising awareness and money to save the lives of hundreds of leukamia and lymphoma patients.

For those with blood diseases who have exhausted all other treatment options, a bone marrow transplant may be their last hope for a cure.

By running with a tyre dragging along behind him, Ah Siao is hoping that his efforts will raise enough awareness to get Singaporeans to donate to the good cause and become volunteer bone marrow donors.

BMDP is a non-profit organisation which builds and maintains Singapore’s only register of volunteer donors who are willing to donate their bone marrow to save the lives of patients with blood diseases.

The organisation also helps local hospitals search for a donor match for patients in both the local registry and partner registers around the world.

To date, the database has 50,000 donors and BMDP has facilitated more than 420 transplants.

The chance of a perfect transplant match between siblings is just one-in-four. For unrelated individuals, the odds are about 1 in 20,000.

Yet despite this, less than one per cent of the national population are registered as donors.

To improve the odds of finding a match, the BMDP needs to increase the register by 5,000 new donors each year.

In addition, it costs $150 to tissue-type and add each donor to the registry. Being non-government funded, BMDP has to cover the cost through donations, to the sum of $2 million a year it takes to run the registry.

When YourHealth caught up with him, Ah Siao turned out to be a well-spoken finance professional – the opposite of the unintelligible singlish persona he keeps online.

“(I took on the name Ah Siao because) I want to remain anonymous. The focus should be on the charity. If you use your own name, people think it’s about you and not the charity,” said Gerrard, who wished to be known only by his first name.

He said that he first came to volunteer at BMDP as he wanted to do something to give back to society. “I have no friend suffering from leukamia or lymphoma,” he said with a laugh. “I was just looking for something to volunteer for.”

He soon realised that BMDP was under a huge disadvantage not just because of the large amount of funds it needs each year to operate, but also because of people’s negative view of bone marrow donation.

“People think it’s painful, that they cut you open,” he said. The reality is that just a simple cheek swab is needed to register to be a bone marrow donor. They will only be asked to donate if a donor is identified as a match for a patient.

According to BMDP, the bone marrow collection procedure itself is painless, as it’s done under general anaesthesia with a special needle. There is no surgery involved and other than the remote chance of a reaction to anaesthesia or an infection, the risks to bone marrow harvest are minimal.

“If I drag a tyre around, confirm people will see. Then people will ask what am I doing, then they’ll go to the website to take a look,” he said, stressing that education is the key to getting people to donate.

“So many people run for charity. But what’s so special that people will take a look, donate money? What I’m doing is like a purple cow (gimmick),” he said.

He confessed that when he first thought up the gimmick, he sorely overestimated his abilities.

“The first time I took the tyre out for a 2km run, I almost died. I wanted to back out there and then. But cannot, I already told everybody, so must do it,” he said.

While he readily admits that it is a painful and arduous task, Ah Siao says it’s nothing compared to the pain of leukamia and lymphoma patients suffering their treatments while waiting for a bone marrow match that could save their lives.

“People ask me, why are you torturing yourself like this? I thought it would make an impact.

“My pain is nothing compared to the pain of a leukaemia patient who cannot rest and get better. That’s the harsh reality they face,” he said.

Five days a week, he wakes up at 4am to run for four to five hours, then another run later in the day at 7pm with running clubs. For the other two days, he engages in less arduous exercises like his martial arts hobby and aquajogging.

“Have you tried aquajogging before? It feels like that,” he said. Aquajogging is where a person straps a belt onto his or her waist and attempts to run in water.

While it’s similar, Ah Siao says running with a tyre is much, much worse.

“My muscles start to ache within 10 to 15 minutes. It feels like running in water but it never ends. In the pool you can see the end of the pool, but running (the 21km training route) feels like it never ends,” he said.

However, it’s not just the drive to raise money for charity that keeps him going. It’s the people around him and those who encourage him on his daily travels.

“On the road, truck divers or motorcyclists will give me a thumbs up, and when I pass other runners, they clap,” he said.

He said he’s had his fair share of odd looks. Taking the public transport with the tyre, he has encountered children who point and him and ask “ma, why this kor kor (older brother) got tyre”, and dogs who chase him thinking his tyre is a new toy.

“Uncles ask me, ‘xiao di (small brother), what are you doing’. I stop and tell them about the bone marrow programme,” he said.

“I think I’m making a change one person at a time.”

Parents in the dark

While he actively seeks out his friends to spread the message, his family however knows nothing about his activities.

“My family cannot know lah,” he said, explaining that he doesn’t want his mother to worry. “She only sees me coming home with dirty clothes and gets angry.”

To join the BMDP register as a volunteer bone marrow donor, any individual in good health and between the ages of 18 and 49 just needs to provide a small DNA sample through a simple cheek swab.

A bone marrow transplant is becoming a preferred treatment for many blood diseases and the work of the BMDP is escalating year-on-year.

In the first six months of this year alone, more than 200 requests were submitted by the local hospitals to find a match for their patients.

“We are very excited that one of our regular volunteers has signed up to kick-start this initiative. It will hopefully help us raise much-needed funds as we don’t get any government support,” said a spokesperson for BMDP.

“We hope ‘Marathon Madness’ will raise awareness and get more people to understand that one simple act can actually save another person’s life,” he added.

Interested donors can go to http://giveasia.org/movement/marathon_madness_for_a_match to make a monetary donation, or http://www.bmdp.org to sign up to be a volunteer bone marrow donor.