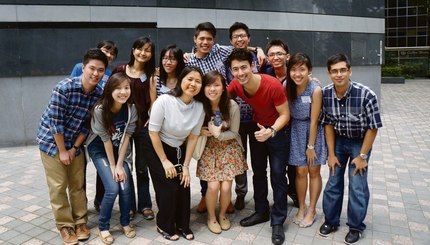 Fearful of how her friends would react to her brother, who has Down’s syndrome, 19-year-old Jaclyn Lim used to be afraid of inviting her friends back home.

And when the family went out, her brother would sometimes throw tantrums or laugh and talk to himself, drawing “strange looks” from other people.

“He would do things that would make us feel embarrassed,” recalled Jaclyn. “There were actually many times when I felt ashamed being out with him, mainly because I was afraid of how people would look at me because of my brother.”

From coping with feelings of jealousy and frustration, to worrying about who will be their siblings’ caretaker as they grow older, brothers and sisters of children with special needs have a unique set of struggles.

And that is why, two weeks ago, eight undergraduates from the Singapore Management University (SMU) organised a workshop to address the challenges these siblings face.

In bringing 15 siblings of children with special needs together, the organisers hope the participants, aged between 13 and 20, can network and support each other.

While children with special needs are often the focus of attention, their siblings remain a neglected group, said social workers from the Rainbow Centre, who participated in the workshop.

One of the workshop’s organisers, first year business undergraduate Marcus Lee, said the group’s research on the topic revealed that “these siblings usually want to share their problems but they cannot find people who have similar problems”.

The 22-year-old added that the group had initially wanted to do a project for special needs students, as part of a Community Service Project requirement. But as they spoke to Ms Lau Lee Fang, a parent of a 15-year-old autistic son and a volunteer at the Rainbow Centre, “this subject of siblings popped out and we thought it’s actually quite interesting”.

“They do have needs that people don’t see and people aren’t aware of, said Mr Lee. “We thought, hey, why don’t we try and champion this cause since nobody is doing it.”

To reach out to their target group, the SMU undergraduates distributed fliers to special needs children at the Rainbow Centre for them to bring home.

Held on a Saturday morning, the workshop started out with icebreaker games to allow participants to get to know one another, followed by hands-on activities to foster communication and teamwork.

It ended in a panel discussion with two social workers from the Rainbow Centre, Ms Diana Wee and Ms Cynthia Lee, as well as artiste George Young, who has two autistic siblings, and Ms Jacelyn Lim.

The panellists shared their experiences and discussed participants’ challenges.

“Acceptance of the siblings’ difficult behaviours in public is a source of embarrassment to quite a number of them,” Ms Lau told TODAY after the workshop, while Ms Lee noted that “some of the negative reactions from members of the public may result in some of their negative feelings and experiences”.

Concurring, Jaclyn said there were times when her family heard “negative things being said about mentally disabled people”. “It is hurtful, especially knowing that your family member is being looked down upon by other people.”

And while Jaclyn’s family has learnt to overcome such problems together as a family and to love her brother no matter the circumstance, some siblings of children with special needs may feel left out when their parents focus on the child with special needs, according to Ms Diana Wee.

“Parents usually spend more time with the child with special needs and the siblings find that they have very little time with their own parents,” said Ms Wee.

She added, however, that “definitely there are those siblings who feel that there’s no issue – they enjoy the growing up journey with their own siblings”.

Describing the workshop as having “really liberated me”, 19-year-old participant, Merlyn Tan, said she now knows that “I am not alone … there are other people” in similar situations.

Growing up, Merlyn said she used to feel a mix of frustration, jealousy, and embarrassment towards her younger brother, who is autistic.

When her younger brother, now 16, was diagnosed with the condition, Merlyn said: “There was a bit of despair (and) some disappointment … and maybe some regrets.”

“But as I grow up and actually understand him from a better point of view, it’s not that bad. I actually feel very grateful to him, because he actually brought the family really together,” she added. Mr Lee hopes the community service project will be sustainable beyond the workshop.

The organisers have started a Facebook group for the participants of the workshop to keep in touch with one another.

Said Ms Wee: “It’s a good move because the objective is really for siblings to meet one another to know that they are not alone in the journey.”