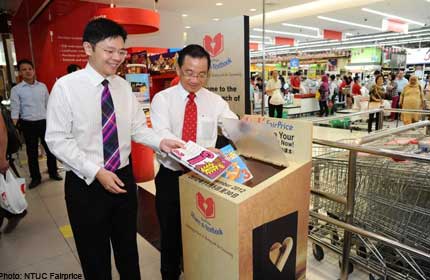 Even in a digital age, students still need hard-copy textbooks to study.

This is why the NTUC FairPrice’s Share-A-Textbook project continues to be relevant in serving the needs of the community, said Mr Seah Kian Peng, chief executive of NTUC FairPrice, yesterday.

He was speaking at the launch of the 30th anniversary of the book project, which is aimed at reducing the financial burden of education on lower-income families, as well as encouraging thrift and recycling among Singaporeans.

FairPrice this year has set a high collection target of at least 350,000 textbooks for itself – a more-than-tenfold increase from the over 30,000 books collected when the project was first launched in 1983.

Last year, 320,000 used textbooks were collected and benefited about 15,900 students. This is to meet the increasing demand from needy families as the project has become more well-known over the years and outreach efforts to the public have paid off, said FairPrice.

Over the years, some 166,000 students have benefited from over 2.4 million textbooks collected under the project – an amount enough to encircle Singapore’s coastline about 31/2 times if they were laid out end to end.

Acting Minister for Culture, Community and Youth Lawrence Wong said at the event yesterday that the project works in line with the Government’s efforts to build an inclusive society.

He said: “(FairPrice’s) project reflects the community spirit we have in Singapore. The giving of books and the contributions by volunteers demonstrate the good we can do when we all come together as a community.”

Some 109 organisations, with a total of 650 volunteers, have been roped in this year to help with the mass community collection and to sort out and distribute the books.

People interested in donating used textbooks can drop them off at collection boxes at all FairPrice outlets until Nov 30.

FairPrice is also giving out $650,000 worth of study grants this year to some 700 needy students who are children of lower-income FairPrice members and employees.

The grants range from $200 for primary-school pupils to $3,000 for tertiary students. Mr Evan Lim, 23, a third-year information-engineering and media student at Nanyang Technological University, is one of the recipients of the grant.

He said: “The money will help pay for my tuition fees, and will certainly lessen the financial burden on my parents.”