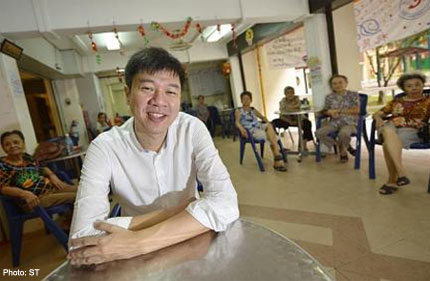 He started out trying to teach teens to think, through General Paper (GP) tuition. Now Mr Tong Yee has “graduated” to their parents.

He wants to teach adult Singaporeans about social participation. “I don’t think Singaporeans understand completely what it’s about. They complain but complaining is not the same as participating,” says the co-founder of Thought Collective, a fast-expanding social enterprise with 110 employees which runs an English and GP tuition school, two cafes, a magazine printing arm and educational trails.

He plans to set up a civic museum in Queen Street by the middle of next year. Based on a pop-up “pasar malam” (night market) concept, it will feature an ever-changing array of “citizen-led” artefacts. If the theme is, say, fear in Singapore, people will be asked to bring in items that symbolise trepidation for them, like their O-level certificates or a bamboo cane.

The topics will closely follow current affairs, so that it will become a museum of contemporary culture, where visitors can peek into the local psyche. It will also be a launch pad for adult civic education classes, somewhat like The School Of Life in London.

He also plans to start a Singapore version of the social issues magazine, The Big Issue, sold on the streets of Britain by homeless people, except that it will be hawked by poorer students here who need levelling up.

To deal with the creeping spectre of social intolerance and unneighbourliness here, he’s got fixes figured out too.

Many commercial building and mall lifts now broadcast ads but not the lifts in HDB blocks which, he notes, is the case probably to steer clear of commercial activity.

He is now exploring with HDB and Central Singapore Community Development Council the possibility of showing videos of the lives of people in the neighbourhood to break Singaporeans out of their insularity.

He sees these HDB lifts as the perfect neutral “civic space” to push social agendas and build a sense of community. “When we get into a lift, the first thing is our phones get shut off. Those 15 seconds it takes to go up and down are very valuable because it’s the time when we go to work and come home that we ask ourselves what it’s all about,” he notes.

The images he hopes to show are not those of impoverished elderly folk living in rental blocks but rather “Auntie, come take picture with us” – social media-style camera phone footage taken by students interacting with the elderly on ground-up community service projects.

He sees this as a needed antidote to the toxic narrative among some right now, that “Singapore is a sucky society; we don’t give a toss about our older people”, which he feels is very “unbalanced”. To him, the best way to mitigate the Not In My Backyard Syndrome – used to describe the public outcry over senior activity centres (SACs) being built in various places here – is to turn such centres into property-value boosting assets rather than liabilities.

He has been working with Thye Hua Kwan Moral Society and other voluntary welfare groups which run SACs on how to get people to see them “not as money suckers but as service providers”, and to see senior citizens as “service providers rather than just beneficiaries”.

One way, he suggests, is having the elderly offer childcare services and cooked meals, which would make such facilities a sought-after addition to any void deck. This can easily materialise within 10 to 15 years, as the next cohort of elderly are more skilled.

Right now, he acknowledges, many of the abandoned elderly have few skills. But after studying a rental block – Toa Payoh Lorong 7’s Block 15 – over the past year, he noticed the elderly there had riveting stories to tell.

He has since roped in 10 of them as story tellers for his Social Cohesion trail, which started in February last year and has seen around 700 student participants. The students, who each pay about $15, gain insight and the elderly receive a sustainable income. Eight half-hour story-telling sessions get them about $200, enough for their monthly needs.

Each time, upon entering the block, he notices the participants recoil because the residents’ problems intimidate like “a big black hole that will suck them in”. “But once they are invited into a home, you see an emotional shift. After talking, they realise that actually the needs are not so big… The old person just needs $26 a month for subsidised rental.”

As for uncoordinated efforts on the ground to help the poor, which he noticed at Block 15, he’s working on a mobile app to change that.

Many helping hands are extended to needy residents here but often the efforts overlap. One elderly woman he talked to, who didn’t even like Milo, had 15 tins stacked against the wall – donated by various charities.

He has been developing an app that schoolchildren can run when doing their community service projects. After chatting with a rental flat occupant, they can key in the apartment number, needs and who is already providing what across the calendar year. He expects to launch it next year.

Lien Centre For Social Innovation’s manager Jared Tham, 34, who has known Mr Tong for about a decade, says Mr Tong’s sense of personal mission is clear to all who know him – to expand the social and emotional capacity of Singapore youth. It takes courage to take this untravelled path “in a Singapore where everyone expects the Government to be all things to all people”, he says.

He was a serial repeat student who often felt rudderless. Today, he is a super-tutor determined to spare his students his lost years.

Mr Tong spent his formative years in England, where his father, who comes from a shipping family, was doing his postgraduate education. His mother was a commodities trader and they returned to Singapore when he was 11, where he struggled to fit into Nanyang Primary, then Catholic High School. His younger sister was streamed into the Gifted Education Programme while he floundered, repeated his O levels and spent the year watching movies.

He learnt how to drive on his own, never bothered to get a licence and was arrested on the road at 21. But at Nanyang Junior College, GP tutor Hamimah Abu listened to him, and turned his life around.

“She lovingly affirmed my ‘gifts’ and demonstrated what a life that was dedicated to the contribution of others looked like,” he says. Unfortunately, after mentoring him for 10 years, she died after a traffic accident in Tasmania in 2003.

He scraped into the National University of Singapore’s Theatre Studies faculty with C,C and D grades and an A1 for GP, and repeated his final year there too.

It was only at the National Institute of Education that he found his calling. He returned to Nanyang JC to teach GP, on relief-teacher terms because of his criminal record, till he was reinstated to the full terms after two years.

He started noticing the plight of many repeat students. They did well enough for a full A-level certificate but failed to get into any local university. No junior college would take them, private tuition for all subjects for a year was costly, and self-study was daunting.

He started taking them under his wing, roping in tutors and giving them free GP tuition at fast-food outlets. Within a year, 25 students mushroomed to 400. That was how School Of Thought started in 2002, as a community service programme to help repeat students falling through the cracks.

A year later, they launched their first eatery serving locally sourced food, now in Queen Street, and another at Botanic Gardens, and soon in a museum in the civic area. In 2009, they started Thinkscape, to bring Singapore’s history to life with heritage trails of Little India and Geylang, weaving in issues such as income disparity.

From the start, Thought Collective chose the social enterprise route, never seeking government funding or public donations. “Generally, any businessman worth his salt will tell you that if you need government funding to start your business, you’re going to collapse anyway. But if your business model is good, it will sustain itself.”

He’s since learnt that “if you show you can stand on your own two feet and you are for Singapore, many agencies are willing to help”. On National Day, he and his friends spent $13,000 of their own money to launch Stand Up For Singapore, where they roped in 300 young people to distribute badges across MRT stations to encourage commuters to give up their seats to those who need it.

The flash mob effort was their attempt to counter “recent negativity in a positive way” and build social capital. Since then, the Ministry of Transport and SMRT have expressed interest to come on board and support them for their next outing around Christmas.

To journey with his students all the way and put what he teaches to the test, he has taken the A-level GP paper as a private candidate over the past eight years.

Twice, he confides with a grimace, he scored a B. “I got carried away, too much knowledge, wanted to show off.” He is still sore about it but doesn’t mind sharing the “value in failure”.

Although other super-tutors in his league who can command an audience earn more than $50,000 a month or above half a million dollars a year, he and his partners have capped their per-hour wages because of their “value system”.

He makes from $4,000 to $12,000 a month, depending on hours clocked. “You need only so much to live responsibly, even in high-cost Singapore,” says the Christian father of two toddlers who is married to an accountant.

Although half of Thought Collective’s revenue comes from tuition, his hope is to phase out tuition for its own sake in his lifetime. To that end, his group freely imparts lessons learnt on engaging youth with mainstream schools. “One of the interesting things about teaching in the private sector is that students are not beholden to you. If you suck, they will walk. And because of that, there’s always immediate feedback,” he says.

So far, about one-third of all junior colleges here have asked his group to share best practices and how to integrate civic and character education into GP.

His other aim is to help close the income gap in Singapore and “increase the social capital” of poorer students. Up to a third of his students used to receive a fee subsidy given by the school, with the poorest paying $60 a month. The normal fees are $200 a month, one third less than the market rate outside.

He says he manages to percolate so many ideas because he avoids wasting time “emo-ing and angst-ing”. “A day can be very productive, if we are not so scared of people judging us and just doing it,” he says. And so he gets on with the business of change, one student at a time.