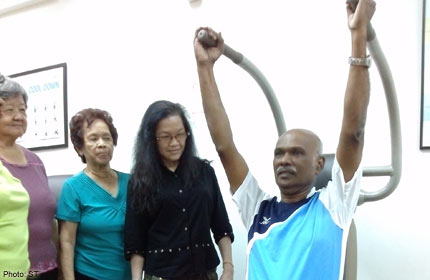 Fourteen-hour days are typical for grandfather of four Gopal Kanapatty.

In the evening, he takes the train to Queenstown for a number of grassroots activities at the community centre before returning home and turning in at close to midnight.

Why the punishing pace?

“Work is stressful. Community work is how I destress,” says Mr Gopal.

He lives with his wife, 65-year-old housewife Vivakaambal, who is equally active in the same community centre. His two grown children are married and live on their own.

Why not retire then?

There is no reason to as his job is “partly my business”. He adds: “It’s my livelihood and I want to be financially independent.”

He has volunteered at the community centre since 20 years ago when he lived in the vicinity. He chairs the Queenstown Active Ageing committee and co-chairs its Indian Activity executive committee.

He is pretty hands-on when it comes to his committee work.

“It doesn’t mean that as chairman, you just sit at the desk and plan. You also arrange buses for outings, book venues, lay out tables and chairs for events, and even help to get the streamers and balloons ready,” says Mr Gopal.

The activities he helps organise at the community centre include a bi-annual blood donation drive, quarterly health screenings and nature walks for about 400 people in the estate, such as taking three-generation families in 12 buses to places such as Labrador Park and HortPark.

On top of his weeknight visits, he is at the community centre almost every Saturday to supervise volunteers who give English- and Tamil-language reading classes to 20 needy students for about 11/2 hours in a joint project with the Singapore Indian Development Association.

For the Indian Activity group, he organises parties for Indian senior citizens and outings such as to Little India and Orchard Road during festive light-ups.

One year ago, he mooted the idea of the Queenstown Wellness Centre, where seniors going to the nearby Tanglin Halt Market could be encouraged to drop in to exercise, play mahjong or sing karaoke. They tapped on grassroots funds for the centre, which opened in July.

“The space was under-utilised as a clan group’s traditional Chinese medicine centre. So why not use it to reach out to seniors and have more active ageing?” he says of the centre, which takes up the ground floor unit of a two-storey shophouse.

He says: “Serving the community is one way to live to the fullest. I can’t imagine it any other way.”