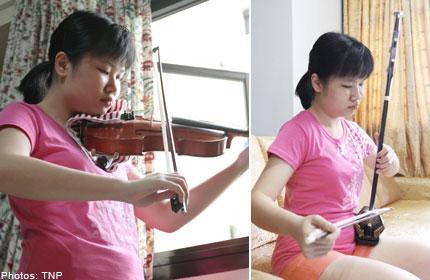 She was born blind, and when she was five, her mother left her and she went to live with her aunt and uncle.

She had two visits from her mother a few months later, then never heard from her again, while her father, who lives elsewhere, would visit occasionally.

Stephanie Ow grew up a timid and introverted girl, until she took up playing the erhu and violin two years ago.

Today, she is a bubbly 16-year-old who has no qualms about getting up on stage in front of large crowds. She even performed at the President’s Star Charity Show last year.

Stephanie said: “Music has helped me to open up, to talk more to people, to be more cheerful and to manage my time.”

“When I go up and perform and when I hear the applause, I feel a lot of happiness,” she added.

Of her success, Stephanie, who is a recipient of the CDC’s Special Talent Fund (STF), said: “I tell myself, if the sighted can do it, so can I.”

Stephanie was born with retinal dystrophy, which causes blindness. After her mother disappeared, she was brought up by her paternal aunt in her four-room flat in Sengkang.

Stephanie’s father, who is jobless, sees her only once or twice a month.

In an interview with The New Paper, her aunt, Madam Ow Sau Fun, 54, a housewife said: “When she first came in, she didn’t talk at all. Even when she was tired or hungry, she didn’t say anything.”

Stephanie, a Secondary Three student from Ahmad Ibrahim Secondary School, found her passion and talent in the erhu when her aunt and uncle felt that the introverted teenager did not have an outlet for her energy.

Madam Ow said: “She would be in her room, with the radio turned on, and she would be jumping around the room, or just reading (braille) the whole day.”

With the help of a volunteer from the Singapore Association of the Visually Handicapped (SAVH), Stephanie started her erhu lessons at the Liberal Music & Arts School at Hong Lim Complex in 2010.

She applied for the STF last year and receives $5,000 a year, which pays for her lessons and exam fees.

Mr Teo Ser Luck, Mayor of North East District, said: “When Stephanie first applied for the (fund) in 2011, the fund evaluation panel found her to be someone who was determined to take on the challenge of mastering the erhu, despite being visually impaired… We certainly hope the STF will benefit more budding talents like Stephanie.”

But Stephanie admitted that at the start, she did not really like playing the traditional Chinese string instrument until she was able to play simple classical music about two to three months later.

The following year, she also took up violin lessons from the same school and liked “feeling the shape of the violin and the sound of it”.

Now, she brushes up on her skills by spending an hour practising on her erhu every day. She practises for half an hour on her violin daily.

Unable to read musical notes, she learns by listening to recordings. During lessons, her music teachers read out the notes to her.

Learning the instruments has made Stephanie more confident, said Madam Ow, who added: “Stephanie has become livelier and knows how to talk.”

Halfway through the interview, she excitedly shows Stephanie’s music certificates.

It is no wonder that Madam Ow feels proud, even though she and her husband have made some sacrifices.

When asked why she took Stephanie in, she said: “Just because she’s my niece.”