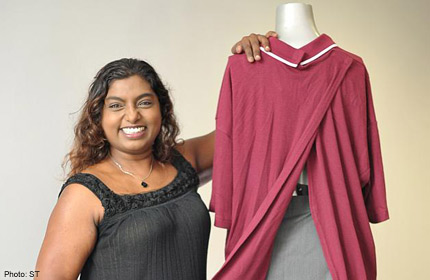 Small buttons on clothes can pose a big challenge for elderly people who are less dexterous – a problem that Ms Shamla Ramasamy wants to fix.

Senior citizens’ clothes should be helping and not hindering them, said the 38-year-old.

Her mission grew out of a chance encounter with an elderly woman embarrassed to ask for help in using the bathroom.

The old woman was looking around desperately for someone to help her use the toilet for the disabled, recalled Ms Ramasamy. When helping, she noticed the senior citizen had trouble pulling down her pants while in a wheelchair.

“If her clothing had been a bit easier for her to use, it would have been an easier encounter. I realised there could be a better way of doing this,” said the law lecturer at a polytechnic here.

Taking matters into her own hands, the bubbly woman set up social enterprise Purple Threads three years ago with her mother, Mrs Peggy Ramasamy, 64, as her partner.

The clothes, which the pair imports from North America and Europe and sell online here, are specially designed so people with limited mobility can easily wear or be helped into them. The range includes dresses with hidden Velcro strips, polo-necked shirts fastened with snap-ons and wheelchair-friendly dress pants.

She said of her customers: “Being able to dress themselves gives a greater sense of dignity and freedom to do their own thing.” One even wrote her an e-mail thanking her for giving him his dignity back, she recounted.

Her imported apparel look more snazzy than the more elastic-based clothing she has seen on the elderly here, which look like sweatpants and pyjamas, she said.

Currently, a large part of her clientele is in Indonesia and Malaysia, though she also serves Singaporeans, including some friends and family members.

The nursing homes she approached here so far have declined to buy from her. Cost is a deterrent as the clothes she sells typically cost around $40 to $60.

Moreover, there is a stigma here about these clothes, said Ms Ramasamy, who used to work with the National Council of Social Service.

Most of her customers do not want others to know that they need this sort of clothing, so her packaging has to be discreet. Her friends and family members here who wear her clothes also declined to be interviewed.

“People here are so used to adapting themselves to fit the clothing that they don’t realise that as they age, the clothing should be adapting to their needs,” she said.

She is currently trying to come up with prototypes of clothes specifically for Asian clients, which will be more suited for the warm climate and smaller clothing sizes.

The mother and daughter operate out of their home in Jurong East. Purple Threads, which is entirely funded by the younger Ms Ramasamy, managed to break even after three years this year.

But she doesn’t mind at all that her social enterprise isn’t pulling a profit: “If it fulfils a need, then it will have paid for itself.”

She added with a grin: “I’ll be old someday, and I’ll want stuff I can wear that’ll look good!”

To find out more, go to www.purplethreads.com.sg