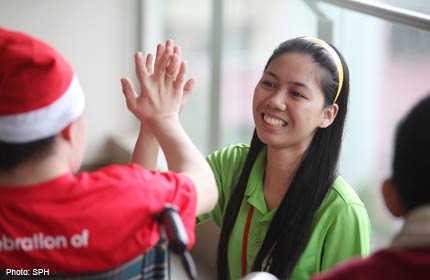 It was her day off on Christmas Day, but Ms Jessica Paglingayen chose to spend time with her patients at the Red Cross Home for the Disabled in Lengkok Bahru.

“I wanted to show them that even if they didn’t have anyone to be with on Christmas Day, we’re there for them,” said the nursing aide from the Philippines.

Her patients have severe or multiple disabilities and many of them are bedridden or wheelchair- bound.

While the 23-year-old nursing graduate did not perform her usual duties, such as bathing or treating patients, she mingled and chatted with them and helped out with whatever she could, such as wheeling them around.

Ms Paglingayen, a Roman Catholic, came here to work in March last year and to join her mother, 44, who has been working as a domestic helper for 12 years.

The eldest of three siblings – her sisters are aged 21 and 19, and her brother is 17 – Ms Paglingayen was not able to spend Christmas with her mother.

But she made it a point to take some time off before Christmas to be with her.

Walking around the festively decorated facility yesterday, the soft-spoken nursing aide was obviously a welcome presence among patients.

As she entered a common area where patients were waiting for a carolling session, a wide smile spread across the face of a cerebral- palsy patient wearing a red Santa hat.

Said Ms Paglingayen of the patient: “He has this special smile. He really appreciates what we are doing for him.”

Her popularity is boosted by her kind gestures.

For instance, she gave away the Christmas goodies she got, such as chocolates, to patients.

She had a four-month stint at a call centre dealing with tax refunds in the Philippines, before deciding that helping people in need was her calling.

“After I started mingling with patients and rendering my care to them, I realised that this was a God-given skill for me (to use) to take good care of them.”

Her reasons were two-fold.

Firstly, she knew it would help out her colleagues who wanted to have a day off to celebrate the special day.

And, secondly , the 25-year-old, who is a Singaporean Hindu, enjoys being in the thick of the festivities at the Downtown East theme park.

“My colleagues and I do take turns to work on public holidays,” said the RMIT University graduate.

Though she does not receive any monetary perks – like double pay – for working on a holiday, she is happy to do so, thanks to her close-knit relationship with her workmates.

“Because it’s a small department, we know each other very well… (Everyone else) can sense if you need help,” said Ms Velugopal, who has worked at the park for 11/2 years.

Her colleagues have recognised her sacrifice. She has received gifts – pens, food and biscuits – over the past two days.

“Maybe tomorrow, I’ll receive some as well,” she quipped.

There’s another thing that Ms Velugopal enjoys about working on a public holiday – visitors are usually in high spirits, and are more prone to laughing and smiling, which “is quite infectious”.

One only has to smile at someone to receive a grin in return, and Ms Velugopal is “happy that I’m able to put a smile on guests’ faces”.

Yesterday, My Paper found her following “Santa” around the park, giving out candy canes and balloons to visitors, and taking photographs of them with Santa.

Wild Wild Wet visitor Ansh Goel, six, was spotted with his family, and was “happy” and “excited” to see Santa and his helper.

He even received a candy cane from Santa himself.

As for Ms Velugopal, she didn’t let the holiday go totally unmarked.

Last night, she met up with friends – an annual tradition for her – for a barbecue at one of their homes.

“Every Christmas, I celebrate with the same group – my secondary- school friends,” she said.

“We chat and have a drink after work.” Here’s to a day well spent.

While most might dread having to work during the festive season, Mr Lester Yew is an exception.

In fact, the 23-year-old store manager with Soup Spoon willingly took on a 15-hour double shift on Monday, which was Christmas Eve.

Business was especially brisk that day at the Tampines Mall outlet which he is in charge of, Mr Yew said.

With a constant flow of customers between 10.30am and 6pm, he and his crew were kept busy.

By pulling a double shift, he said that his Filipino assistant store manager could have the full day off to celebrate Christmas Eve, an important occasion for her.

“It was one of my longest (shifts). Although it was tiring, working together with my staff on Christmas Eve is an enjoyment,” Mr Yew said, describing the camaraderie he shares with his team.

As a store manager, he oversees a team of eight.

While his duties include managing the accounts, overseeing operations and preparing sales reports, he also has to work side by side with his staff to take orders, clear tables and dish out soups.

A fresh-faced Yew was back at work for a half day yesterday.

He said he would be taking his girlfriend out for a buffet dinner after work.

Mr Yew, who comes from Kuala Lumpur, told My Paper about the time he came to Singapore in 2008 for a two-year diploma in travel, tourism and hospitality.

It was then that he started work as a service crew member at Soup Spoon to help pay off his study loan.

The transition during the first few months here was not easy, as he said: “It was the first time being away from home. I never felt stress like that before.”

Financially, he was dependent on his mother, who works as a receptionist and had to shoulder half of his tuition fees.

After graduating, Mr Yew continued his career with Soup Spoon, working his way up.

While he is a freethinker and does not celebrate Christmas, Mr Yew hoped he could spend it with his 47-year-old mother.

He said: “Usually what she eats is home-cooked, so I want to take her to a fine-dining restaurant to try something new – the feeling of really sitting down, relaxing and being served.”