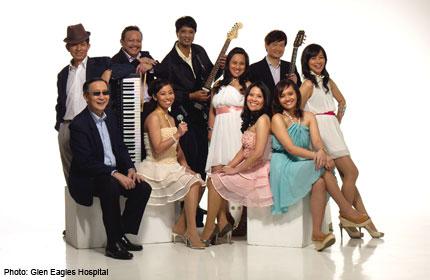 Physicians by day, musicians by night. These doctors and nurses trade their medical uniforms for chic costumes for stage gigs twice a month.

Their band, D’Nightingales and Frenz, have performed at charity dinners, medical conferences and even weddings. They were the runners-up in a nationwide live band competition, LiveoRocks, in July this year.

They have also launched their debut album called Will You Remember to raise funds for Mercy Relief, which provides aid to disaster-stricken communities.

The band’s 10 members and manager are all healthcare-related professionals.

All the 10 tracks in the album were written, composed and produced by Dr Patrick Goh, 52, a full-time specialist sports physician in private practice who is also the keyboardist with the band.

Dr Goh, who once co-wrote a track with Cultural Medallion recipient Jeremy Monteiro for Tracy Huang, said the album aims to celebrate the triumph of the human spirit over adversity.

He added that the idea came to him while he was reading about floods in Manila and he thought “that many of our colleagues are from the Philippines”.

The band then approached Gleneagles Hospital to sponsor them, as most of the members are staff of the hospital.

A month later, the hospital asked if they could produce a full CD of songs.

Dr Goh said: “I said okay without thinking too much. They asked for eight songs, I said I’ll give them 10.”

All proceeds will go to Mercy Relief.

The band started with several doctors who would meet to jam after work.

During one session four years ago, some nurses walked in “and everything changed,” said Dr Goh.

Dr Tho Kam San, 52, an orthopaedic surgeon who started the band, had invited a nurse, Ms Neilissa Yater Dela Cruz, 43, who brought along two colleagues.

Dr Goh said: “We had an upcoming small gig at the hospital and they had agreed to sing…I really didn’t pay much attention till they opened their mouths and started to sing!”

Dr Tho, who plays the acoustic guitar, said: “Bands need to have very good singers. They give a face to our band.”

They now has five female vocalists, all nurses. They had their biggest gig in March last year, when they performed to more than 3,000 people at a company’s annual dinner and dance.

Said Dr Goh: “It was a turning point, at least for me personally. I guess it was the adrenaline rush which music gives…

“I rediscovered a part of myself by the end of the night and the next logical step in that cycle of rediscovery was to restart writing and composing my own music.”

He had not written songs or composed music for at least eight years and the event sparked his passion in music again.

He said: “Its a very ‘right brain’ activity and I think it helps to balance out my ‘left brain’ work in medicine.

“As a result, I think I’m a better doctor because of music, and vice versa.”

Ms Dela Cruz said it is fun jamming with the doctors, although the nurses were very formal with them initially.

“We used to always refer to them as doctors because we wanted to maintain the doctor-nurse relationship,” she said.

“After a few gigs, dinner outings and visits to each other’s homes during festive seasons, we became more relaxed and we’ve become more like friends.”