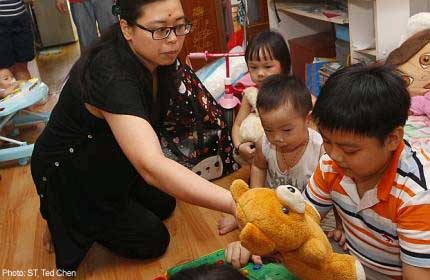 Housewife Joanne Guo – who has six children, three of whom have special needs – received some welcome help yesterday in the form of a 100kg hamper filled with necessities.

Another 549 needy families also received similar hampers, thanks to the efforts of a one-woman charity force known as Madam Fion Phua.

The 42-year-old club membership broker has been driven to help those less fortunate for more than 20 years now.

Mrs Guo, 28, for example, lives in a two-room flat in Aljunied Crescent. Three of her children have cleft palates, including the youngest, just one year old, who was also born with a chronic intestinal disease.

Her husband had to leave his job as a caterer to help take care of the children, making it hard for the family to pay their medical bills. They rely on help from family, friends and neighbours.

Yesterday, the family got some respite as the necessities in the hamper, such as eggs, cereal, rice and cooking oil, are enough to tide over households for three to six months.

While the essentials were stored away in the kitchen, the children pored over other gifts, including drawing books and toys.

Madam Phua counts on friends and even strangers to donate items and help distribute them.

“I don’t take cash. I prefer people to give items and take the time to visit the families. It really opens your eyes,” she said.

Madam Phua added that she got involved after being troubled by the thought of the elderly and needy struggling silently behind closed doors.

In her teens, she volunteered in homes for the elderly but decided to strike out on her own to find out what those living in Housing Board flats needed.

Since then, she has criss-crossed the island helping people in one- and two-room flats, from Geylang Serai and Aljunied to Henderson and Marsiling.

In August, she asked people to bid on her Facebook profile for her designer items with bags of rice.

There were about 50 sling bags, clutches, wallets, coin and key pouches from labels such as Louis Vuitton, Chanel and Alfred Dunhill. They cost her at least $70,000.

Her generosity and dedication have inspired others, including the crew of a foreign ship. They donated more than 100 mattresses when the vessel was docked here earlier this month, after hearing of her work.

For the hamper distribution, more than 1,000 people donated items or pitched in to help distribute them.

They included a donor who gave 500 loaves of bread and another who came up with 500 cabbages.

Another volunteer, Dr Natasha Lim, a 42-year-old ophthalmologist, agreed to give free eye examinations to those recommended by Madam Phua. “Sometimes, people are not motivated to seek help because of cost,” said Dr Lim.

Another person helping out is Mr Bala Shetty, 44, a part-time chef who helped to pay the water bill of a needy family and volunteered to collect, pack and distribute items last week. “We can all contribute a little time to help others,” he said.