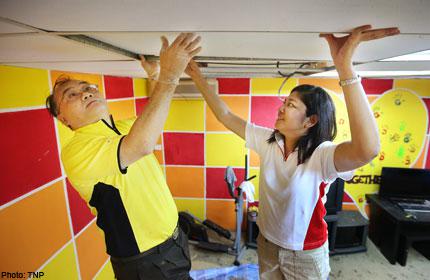 The ceiling boards were missing chunks, the wood rotten from water leakage.

The walls and cabinets were in a similar state, eaten away by termites. In a storeroom where food was kept, rat droppings left a trail across the floor.

These problems had gone on for more than a decade at the Singapore Association of the Visually Handicapped (SAVH) in Toa Payoh.

The association did not have the funds needed to do the repairs, so it continued to live with the inconvenience.

But SAVH does not have to put up with this any more.

A group of more than 80 volunteers from the Building and Construction Authority (BCA) as well as from several firms in the construction industry, are putting in time to repair the building.

Once every few months, the volunteers go to the SAVH and do repair works there for four to eight hours.

Some paint and clean the place, while others help distribute donated clothes to SAVH members. Some even prune the trees in the compound which were potential safety hazards, especially for the blind.

BCA volunteers started helping out at the SAVH in 2009, painting and cleaning an ant-infested office.

These activities eventually expanded to donation drives and collection of old clothing for beneficiaries of SAVH, which has more than 3,000 registered members.

Now, the group wants to do even more.

Mr Benjamin Huang, 33, a senior development officer at the BCA who has been volunteering at the SAVH since 2009, said: “We felt there was a potential to do more, to involve the industry in the project.”

So he approached companies involved in construction to help in any way they could.

“We work closely with industries, so we told them that we were doing charity work.

“(The firms) were more than happy to chip in,” he said.

Malaysian company Boral Plasterboard donated $2,000 worth of new waterproof ceiling boards to SAVH. The boards were installed by Ceilwell, a Singapore company, for free.

Previously, rats and other pests had crawled through the cracks of the ceiling and left droppings throughout the room. The new ceiling boards keep the pests out and allow food to be stored properly.

Late last month, BCA volunteers carried out their first day of renovation works at SAVH, which has been based in Toa Payoh since 1963.

They replaced the ceiling boards in the recreation room and delivered donated clothes and household appliances to SAVH members.

In April, volunteers from BCA and the companies will be carrying out more renovations which are estimated to last a month.

This will include improvements such as replacing lighting to increase energy efficiency and illumination.

When The New Paper visited SAVH on the day the volunteers started work, cracks could be seen in the ceilings of several rooms.

The ceiling boards had black spots – signs of damage caused by water leakage through the roof.

Recalling an incident in 2005, Mr Tan said the toilets could not be flushed after the ceramic pipes were damaged.

Association members, because they were blind, had unwittingly attempted to flush the toilet. After a few times, waste began to overflow onto the floor.

“We really needed to fix things, but we were unsure if we could secure the funds in time,” said Mr Tan.

That year, due to weakness in its governance and management systems, SAVH lost its Institution of a Public Character (IPC) status which allowed it to collect tax-exempt donations.

The National Council of Social Service (NCSS) also withdrew its funding to SAVH then, which came to around $1.4 million, based on 2004 figures.

During this period, public donations to SAVH dropped by $1 million and it had to draw on its reserves to fund its programmes and operations.

It regained its IPC status in September 2006 but required about $1.4 million a year to fund its operations.

Renovations at SAVH have made the partially sighted Mr Abdul Aziz’s time at the association easier.

The 61-year-old massage therapist frequently used a rundown bathroom at a workshop. A new coat of paint allowed him to use the room comfortably.

When he heard of the renovations, he was “proud and happy”.

The members were not the only ones happy with the work.

“There are so many people out there who need help. When we brought (clothes) to them, a lady was very happy,” said Ms Tan Geok Lee, 44, an employee at BCA, who has helped out at SAVH since 2011.

“As a building and construction authority, we have the expertise to build a more sustainable and conducive environment.”