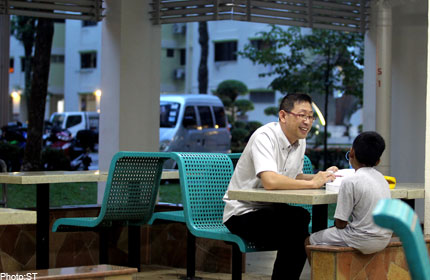 Children whose parents revolve in and out of jail hide emotional scars and rarely have positive image of adults.

So their adult befrienders stick around for at least a year to bond and steer them away from parental footsteps, says Life Community Services Society chief executive James Wong.

The charity helps children whose parents are in jail or were once incarcerated. It works with low-income families too. In all, it serves 950 clients.

Befrienders spend six to eight hours a month with each youngster in the vulnerable seven-to-13 age group who are enrolled in the charity’s Friends of Children project. These hours can go to tuition or outings as well.

Many find it tough to commit a whole year, so volunteers are not easy to find, Mr Wong, 56, says.

Life Community cares for 150 children, usually at the request of their parents, but counts 60 befrienders.

Children with no befrienders get structured aid, such as counselling, birthday celebrations and bursaries.

They are from all walks of life and include couples, a grandfather in his 70s and young people.

There is a sister project for 70 teenagers whose parents are also in jail.

Ten mentors guide them through activities.

Each befriender is linked to a case worker. They gather quarterly to share insights.

The poster child for the East Coast Park race is “little Sam”, nine, who loves running.

He saw the police take his father away. His mother died when he was three and now, his ailing grandmother cares for him.

Sam was physically and sexually abused.

A couple is befriending him.

The inmate population last year was 9,901, according to the Singapore Prison Service.

Half that number may have offspring, Mr Wong figures, so prison-linked charities tend to only fragments of needs.

But he sees fruit.

He marvels that befriended children are back to help.

A boy whose father was on Death Row sings at donor events and teaches guitar to children.

“He was very withdrawn but is now a strapping polytechnic student,” says Mr Wong, beaming.

To volunteer: E-mail befrienders@ life-community.org or call 6837-3700. Register for Run For Life on June 8