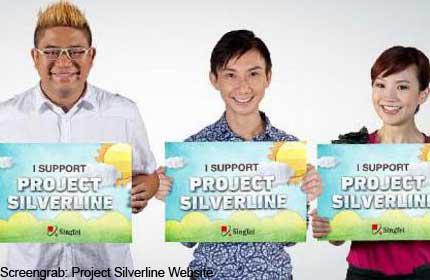 Instead of throwing or trading in their used iPhones, consumers now have the option to donate them to the elderly at any SingTel retail shops.

As part of Project Silverline, SingTel refurbishes the phone with senior-friendly mobile apps. The phones are then given to senior citizens at voluntary welfare organisations, Lions Befrienders and Willing Hearts.

The apps include prompt access to emergency phone numbers, simple reminders for taking medicine and inspiring quotes. These apps were developed in partnership with technology consultancy Newton Circus and advertising firm Ogilvy & Mather.

For every used iPhone donated, SingTel sponsors the talk time and data plan for one year.

Since Project Silverline started in October last year, at least 25 used iPhones have been donated.

Newton Circus also launched a crowdfunding campaign on Tuesday afternoon. By contributing at least $19, people can download the current Silverline apps to share these with their family members or relatives.

Funds collected from the campaign will go to Silverline Mobile which hopes to develop more apps specifically designed for senior citizens.