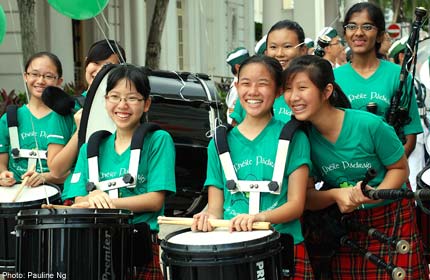 Get ready for a big and very green party next weekend.

Singapore River One and the Irish community here are pulling out all the stops with a three-day street festival from March 15 to 17 to celebrate St Patrick’s Day.

For the first time, Circular Road – the street behind Boat Quay – will be closed off from early Friday morning – 12.01 am to precise – till midnight on Sunday .

And it won’t just be revellers decked out in green. In a first for Singapore, OCBC Centre will be lit up with green shamrocks for the weekend.

The building will join some of the world’s famous landmarks that will go green for St Patrick’s Day on March 17, including the Pyramids of Giza and the famous ‘Welcome’ sign in Las Vegas.

Apart from the light-up, revellers can look forward to what Mr MacDonald proudly called a “full-fledged festival” – a celebration of all things Irish, especially Irish culture.

He said: “The celebration on Sunday for St Patrick’s Day is chiefly a family day revolving around the community.

“But that’s only one part of the festival. The other part is about culture, sports, art and music – which we have not explored in Singapore before. Three days allows us to expand the celebrations to a full-fledged festival.”

Irish musicians will be flown in specially for the event, which will include an international street fair and heritage tours on the shared history between Singapore and Ireland.

Food and drink promotions will give patrons a taste of Irish culinary favourites, all washed down with cold pints of Guinness.

The festivities will culminate in the annual St Patrick’s Day Parade along the Singapore River at 3pm on March 17.

Mr Tyrone Tabing, executive director of Singapore River One – a non-profit umbrella group formed to market the three quays along the Singapore River – said this is their first major event .

“The excitement surrounding St Patrick’s Day is telling. It shows that many still hold the Singapore River very close to their hearts,” he said.

The shops and tenants at Boat Quay had thrown their support behind the group and the event, he added.

“It bodes well for reinstating the Singapore River as one of Singapore’s key attractions. We’re all looking forward to ‘going green’ with Singapore’s Irish community.”

The bigger and better celebrations have come with a hefty price tag – $200,000 has been spent on the festivities this year.

This is 10 times the usual amount spent on celebrations in previous years.

But for Mr MacDonald, it’ll be all worth it when he looks out across the St Patrick’s Day crowd.

“My favourite part of the festival is seeing thousands of people from all over the world dressed in green, enjoying themselves eating, drinking and dancing. It gives me a huge sense of satisfaction.