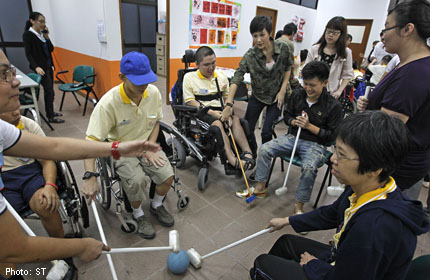 Leading entertainment personalities will take to the stage next month for a charity extravaganza that aims to raise $3.5 million for people with disabilities.

About 30 performers – who include Singaporean actress Zoe Tay and Taiwanese singer Rachel Liang Wenyin – will entertain the crowd alongside young beneficiaries of the Society for the Physically Disabled (SPD).

The three-hour fund-raiser, to be held at Caldecott Broadcast Centre and televised live on Channel 8 on March 17, is part of the society’s overall efforts to raise $5 million this year, up from $3.5 million in 2012.

Performers include muscular dystrophy sufferer Jeffrey Koh, who will demonstrate his special painting technique when he takes to the stage.

Viewers can make donations by calling the hotline numbers displayed during the show, which takes place every two years.

The SPD Charity Show 2013 is themed Where Dreams Begin.

Besides the $3.5 million the society hopes to raise, the rest of the money it needs will come from government funding, individual and corporate appeals, and donation boxes in supermarkets.

The money will go towards paying for around 20 programmes run by the society, which has 4,500 beneficiaries, more than double the number in 2007.

Its new projects include the Early Intervention Programme for Infants and Children, which was set up last year to help young people with special needs.

The society has also hired more staff to cope with its burgeoning growth.

“Our philosophy has always been to raise what we need and not raise to accumulate reserves, as most of our donors are ordinary people who may not have much themselves,” said society president Chia Yong Yong.