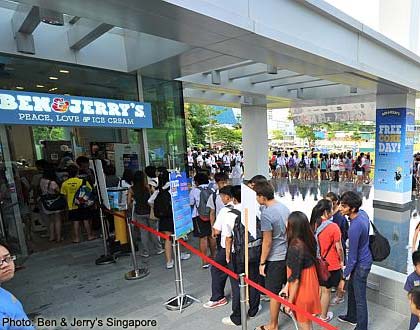 Over 46,000 scoops of free ice-cream were served up in eight hours as a show of appreciation to fans of the store.

“This is more than just free ice cream. It’s about thanking our fans and showing, in the simplest way possible, just how much their support means to us,” said Mr Kenneth Lau, Brand Manager (Ice Cream Category Lead), Unilever Singapore.

A donation box in the form of an enlarged pint also stood in the front of the snaking queues which formed at seven of their outlets on Tuesday. All proceeds will go to local non-profit organisation Project Happy Feet. This is the seventh year Ben & Jerry’s is holding this event.