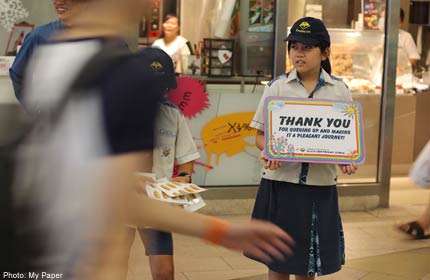 Try telling the heartlanders that people in Singapore have become less gracious and one gets mostly blank looks.

Tell them that the latest Graciousness Index, released last Tuesday, was the worst in five years, and most of those randomly approached are puzzled.

Madam Indira Mohd, 55, who sells nasi lemak at a food centre in Marine Parade, wants to know how the index is derived.

The survey, an initiative introduced by the Singapore Kindness Movement in 2009 to measure graciousness, polled 1,201 Singaporeans, permanent residents and foreigners.

They were asked to rate from 0 to 10 how far they agreed with given statements.

Madam Indira tries to process the information, then says with a laugh: “Alamak, they didn’t add me (in the list of people)… because I can tell you, I personally feel that people have been kinder and more gracious.”

But the hawker, who has operated the stall for nearly 13 years, qualifies her statement quickly: “Of course, I’m speaking from what I’ve observed from where I stand here seven days a week.”

She has seen how customers at the busy hawker centre finish their food quickly, giving the tables and seats up to others who are waiting.

“In the past, people had to chope seats or they will hog the tables even after they have finished eating.”

In fact, he claims he had “only recently” told his wife that he had witnessed “more kind acts”.

“When you are on the go (as a cabby), you get to meet people from different walks of life. Got old, got young, got men, got women,” he says in a sing-song chime.

“Last time, people will cut queue (to take the cab) but now, I see young people stepping aside to give way to an elderly person or someone with young children or babies,” he says with an approving nod.

Mr Ho Meng Chee, 33, a technical officer, who takes public transport, says he is pleased to see that “commuters are giving up seats” for elderly people or pregnant women.

He adds with a chortle: “Or maybe, they are worried that they may become ‘famous’ on the Internet (where they may get flamed).”

Interestingly though, a new social media component was added to this year’s Graciousness Index study.

So it was certainly heartening for this heartland aunty to hear account after account of kind and gracious acts during her jaunts around Marine Parade, Ang Mo Kio and Bishan last week.

It was quite a difference from the bleak picture the survey represented:

Received graciousness? 41 per cent (down from 65 per cent)

Done graciousness? 62 per cent (down from 83 per cent)

Witnessed graciousness? 53 per cent (down from 73 per cent)

But that’s not to say the survey was inaccurate. The methodology was the same as the previous year and 1,201 is quite a powerful sampling size, compared to my random heartlander discussions.

Dr William Wan, general-secretary of the movement was reported as saying that the drop could be due to how people are preoccupied with the rising cost of living, in particular housing and car prices.

“When they are more preoccupied, they are less sensitive to acts of graciousness. They may have actually received an act of graciousness but said they did not,” he said.

And that really may be the case.

I think we may sometimes fail to recognise or acknowledge the good acts in our hurry to get on with our daily routine.

“Saying ‘please’ and ‘thank you’ are also ways of being gracious, but that thought would likely not strike you because many of us have come to take it for granted,” she says.

I feel that it is in all of us to have a kind or gracious nature. It’s really only how often we reflect that in our actions.

Most times, we tend to share the negative incidents that happen in our lives, and not the happy ones because it’s easier to complain than to compliment.

And we do feed on each other’s energy, don’t we?

How many times have you “liked” on Facebook someone’s nasty payback action or snide remark? It’s far harder to respond to a “nice” update, isn’t it?

It may perhaps be good to take a leaf from this status update on a friend’s Facebook, which received 32 likes and more than 13 comments: “Today, a taxi scratched our car and it was considered another accident.

“Initially I was furious but when an old man walked out of the taxi, my heart softened.

“I told the old man that his life is more important and he should be more careful… although I did look upset (more for his life, not so much about the repair).” We should applaud acts like this.

Maybe, just maybe, since social media is now monitored, more of us would feel that more acts of graciousness are happening around us?