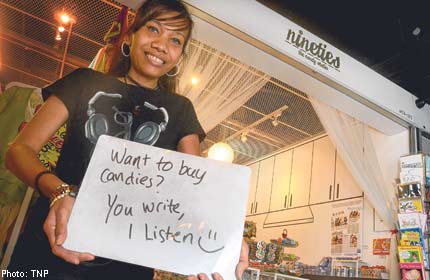 There is an increasing number of social enterprises emerging in the local market.

In fact, Social Enterprises Association has seen its members more than double from 104 to 214 in the past four years.

Social enterprises are THIS quaint candy store in Bugis Village is different – and not just because it sells retro sweets.

90s The Candy Studio is also a strong advocate of social enterprises and hires people with disabilities.

Of its four employees, three are deaf and one has a learning disability. It has shown that the store can operate efficiently even when it has only one worker manning the shop.

Miss Siti Khairunissa, co-founder of 90s The Candy Studio, explained how it works.

The deaf sales assistants wear lanyards with signs that explain their disability and ask customers for patience. They mostly lip-read and reply via a whiteboard.

Ms Azhani, 33, is one of the employees who does this, and Miss Siti said of her: “She’s always readily available and willing to help me whenever I need extra assistance for events and such.”

90s The Candy Studio is part of the emerging market of social enterprises in Singapore – businesses that utilise market-based strategies to advance social causes or create social impact. They may or may not make profits.

Events agency Adrenalin Events and Education has seven employees with disabilities, out of a total of 18 employees.

They include people who are hearing-impaired and those in wheelchairs. The company even runs a weekly one-hour sign language lesson, conducted by one of its employees for the others.

The Social Enterprise Association says the number of its social enterprises members has more than doubled in four years, from 104 in 2009 to 214 last year.

A number of them advocate their cause by hiring people with disabilities. Not all social enterprises start as one.

Like Adrenalin, Bliss hires up to 40 per cent of its staff for the social cause. Past and present employees include people with autism, schizophrenia and learning disabilities.

The restaurant is also keen to hire people with other social needs such as ex-convicts and people undergoing rehabilitation. It has three outlets, with a fourth one opening next month.

Said Ms Low: “As the years went by, it started to become a double bottom line for us, to be both a commercial and a social enterprise. “I didn’t know Bliss was a social enterprise until two, three years ago,” she added with a chuckle.

She said that hiring special needs staff has even raised her restaurant’s productivity.

“My mainstream staff show more leadership as they now have people to look after.

“They take their jobs more seriously and are more motivated,” she said.

Another social enterprise, Professor Brawn Cafe, spells out its mission.

The restaurant has two outlets, and 20 of its 30 employees have special needs.

There is also much to be reaped from hiring people with disabilities. Dr Marissa Medjeral, 32, director of the Disabled People’s Association, said: “By employing them, you are not only giving back but also helping them integrate better into the society.”

Mr Tay said that this workforce is one the industry can tap into.

Suitability is of the utmost importance when hiring people with disabilities, said Dr Marissa Medjeral, director of the Disabled People’s Association.

For example, Ms Christin Low, founder of Bliss Restaurant & Catering, matches her staff according to their working styles. She lets those uncomfortable with communicating with customers do setting up and cleaning.

“What’s more popular is F&B and hospitality. I’d like to see them out front more,” she said.

She also said that people with disabilities do get better with a job.

Mr Roland Tay, founder of Professor Brawn Cafe, which hires people of different abilities such as people with autism, said that his employees have grown in their years of working there.

Said Mr Tay: “Grace was initially very shy, but given all these opportunities, her confidence has been boosted.”

When asked about her job, Miss Lee said: “I like to have a lot of colleagues and it’s an environment where people can understand me. It is a happy working environment.”