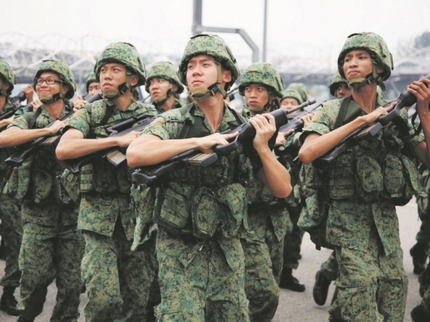 The stars of hit Singapore army-themed film Ah Boys To Men, Maxi Lim, Tosh Zhang, Noah Yap, Wang Weiliang, Aizuddin Nasser as well as Charlie Goh, will trade their army boots for football boots to play in a friendly match on May 22 at the Jalan Besar Stadium.

The six young stars will form a team with a few other local celebrities including Class 95FM Glenn Ong, and will play against Singapore’s ex-internationals like V Sundramoorthy, Malek Awab, Lim Tong Hai, Leong Kok Fann and Terry Pathmanathan.

“This lobang (opportunity) is too good to miss! We are actually going to be playing against former Singaporean legends! On top of that, it’s all for a very good cause,” said Wang, who plays the streetwise army recruit Lobang King in Ah Boys To Men.

The friendly match will be the curtain raiser for the Singapore Olympic Foundation-Peter Lim Charity Cup, which will see Spanish football club Atletico Madrid clash with local team Singapore Selection later in the evening.