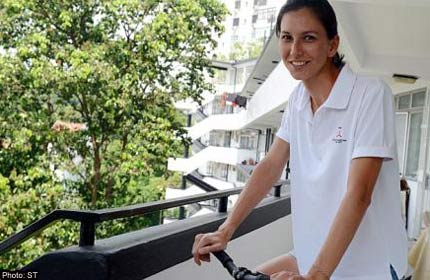 Four years ago, the 30-year-old co-founded The Chain Reaction project, a non-profit group that herds groups overseas to countries such as Timor Leste and the Philippines to bike, run and trek for charity.

It charges these sporty do-gooders a fee, depending on location and duration, to arrange trips.

Participants pay their own way and amass cash pledges for charity.

To date, it has taken about 400 people overseas on such sports fundraisers.

Ms Zhang came up with the idea in 2009 when a friend approached her to complete a five-day, 450km mountain bike race in Timor Leste in aid of malnourished children there.

Former Netball Association president Ivy Singh Lim donated $20,000 then, after hearing about the cause. Ms Zhang was in the national netball team from 2000 to 2010.

When she returned, people asked if “they could go next time”, she recalls.

Ms Zhang, who is single, lives in a bungalow in Bukit Timah with her self-employed father, a Singaporean, and housewife mother, an American, both 63; and her three sisters aged 23, 28 and 32.

She put her sports background and four years working as a marketing executive at Standard Chartered Bank and as a television journalist at MediaCorp to good use by marrying the three careers.

She wants to create a more personal sports fundraising experience and “sell” the idea as an appealing one.

“That sense of commitment and camaraderie when you train for something sets a physical challenge and pushes you beyond your comfort zone, which will then mean something to you,” she says.

Do-gooders may then be more keen on repeating that experience, she adds.

As for focusing on overseas charities rather than local causes, it is about being a “global citizen” rather than ignoring local issues, she says.

“Different people have different causes that resonate with them and if we say, let’s just solve Singapore’s problems while the people of Cambodia and Timor can take care of themselves – that is a narrow-minded perspective to giving back.”

For more information, go to www.thechainreactionproject.com

On her birthday four years ago, 50-year-old Tan Chew Wah felt a jabbing pain in her chest. “It felt like three big stones were crushing me,” says the former nurse of the ordeal, which left her pale and kneeling in a cold sweat at Newton Food Centre after a dinner of mee sua – thin wheat noodles eaten on birthdays for longevity.

Ms Tan, who is now deputy director of the medical education office at Tan Tock Seng Hospital, was diagnosed with unstable angina, which leaves sufferers at high risk of heart attacks.

Six days later, she had a coronary heart bypass where doctors grafted an artery from her chest wall onto her heart.

After making diet and exercise changes and starting on four types of medication, which she has to take for life, the doctors gave her a clean bill of health last December.

She embarked on a thanksgiving pilgrimage this month to walk the 35-day, 800km El Camino de Santiago – a journey towards Santiago de Compostela in northern Spain, where legend has it that the remains of apostle St James are buried. She started her solo trek on May 11 and aims to complete it by June 14.

The arduous nature of the walk – about 22km a day – appealed to the staunch Catholic. “I’m tracing the path where the apostles walked to evangelise, unlike Lourdes or Fatima where the site is already there.”

She is raising funds for needy heart patients at Tan Tock Seng Hospital, many of whom struggle to cope with rising health-care costs. She has canvassed more than $7,000 on an online fundraising website so far.

For her training, she has been doing 30-minute walks round her estate three times a week and an 8km walk from the hospital twice a week.

Ms Tan, who is single, lives in a four-room Housing Board flat in Yishun with her parents, aged 73 and 75.

On her walk, she will be armed with a small Singapore flag “for the finish line”, two walking poles, a windbreaker and a sleeping bag rolled into a large backpack.

Doing this walk overseas gives her more confidence. “The environment to do these sports-related fundraisers may not be so conducive locally, but it is very established overseas,” she says.

“I have trust and faith that I can complete it.”

To donate, go to www.give.asia/movement/walk_for_a_good_heart_i_am_walking_to_raise_funds_for_ttsh_cardiac_patients

“It is such a great feeling to cross the finish line knowing that your participation is going to positively affect someone’s life as a result.”

“My life can be a blessing to others. By doing this to help, I know that I am not wasting my time on earth.”

– MR LIM NGHEE HUAT, 60, an ultramarathoner, at the 217km Death Valley Challenge in the Californian desert in 2007. He has raised more than half a million dollars for charity through running

“I thought this was how it would be like every day for the visually handicapped so the climb was a tribute to them.”

– HO REN CHUN, 19, on his Mount Kinabalu climb with his sister Ren Yung

“That sense of commitment and camaraderie when you train for something sets a physical challenge and pushes you beyond your comfort zone, which will then mean something to you.”

– MS ZHANG TINGJUN, a former national netballer who took part in a five-day, 450km mountain bike race in Timor Leste in aid of malnourished children there

“I have trust and faith that I can complete it.”

– MS TAN CHEW WAH, 50, deputy director of the medical education office at Tan Tock Seng Hospital. She started on a thanksgiving pilgrimage to walk the 35-day, 800km El Camino de Santiago in Spain on May 11 and will complete the journey by June 14