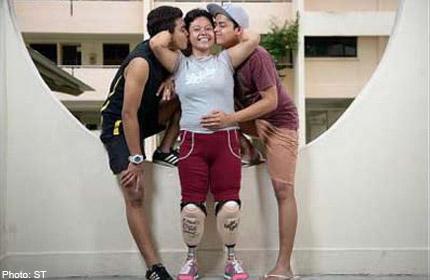 This time last year, Aishah Samad had just begun a new phase in her life.

The 2003 SEA Games shooting bronze medallist had quit her job as an auxiliary officer with Cisco to become a coach, hoping to inspire the next generation of Singapore marksmen.

But her plans were derailed last July when a severe bacterial infection eventually led to the amputation of her arms and legs.

“I was sedated and warded in the intensive care unit for more than two months,” she told The Straits Times of her three-month ordeal.

“I went into septic shock and my major organs began to fail. The doctors gave me less than a 20 per cent chance of living.”

But survive she did, and she is now an ambassador for the Positive Psychology Centre, sharing her story through inspirational talks to hundreds of people. She also hopes to go back to coaching.

The local shooting fraternity has rallied around Aishah, organising a charity fun shoot on May 18 and 19 to help raise funds for a pair of prosthetic arms and legs for her.

The advanced prosthetic arms would give her the ability to grip things, while the legs would replace the current ones that she has, which need to be changed because her stumps are getting smaller. The arms will cost $80,000, while the legs cost about $12,000.

The charity fun shoot will be held at the HomeTeamNS and Safra Yishun range. Visitors can try their hand at shooting while being coached by current and former national shooters. Each ticket (for 10 shots) costs $20.