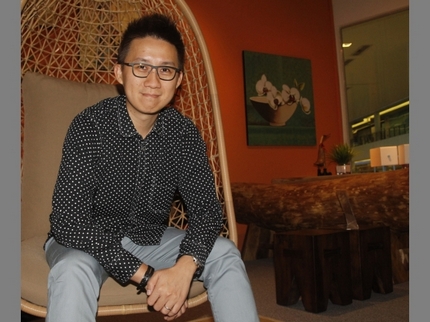 Jeff Cheong is almost silent as he and his crew of three follow an elderly man, Mr Tan Choon Kiang, around on a sweltering Monday afternoon. Video cameras roll as Mr Tan goes from person to person at Chai Chee Seniors Activity Centre, handing out packets of food to seniors and the immobile there.

The filmlet, of a man who has been sacrificing his lunch hour every day for a year to help others, will be posted on a small but growing Vimeo video site called Singaporean of the Day.

The site, a personal project by four friends, was launched in January and its heartfelt videos — of ordinary Singaporeans talking about their hopes, what makes them happy and the causes they champion — have already garnered more than 40,000 views and media interest.

Recent stories include that of Maeve Low, who was diagnosed with Burkitt’s lymphoma at the age of three and has fought the illness bravely; and her mother, Ms Joanne Poon, who wrote a storybook called Brave Maeve for her cancer-stricken daughter, to inspire courage in other sick children and their caregivers.

Then there is devoted husband Kenneth Liew, who has visited his comatose wife almost daily for the past five years; and others such as a cat rescuer, an adventurer, a getai troupe owner and more.

Some, who have seen the videos and written in, say the project — which was sparked by outrage over last year’s Gallup Poll that called Singaporeans “emotionless” — was “restoring the soul of Singapore”.

But for Mr Cheong, a 37-year-old digital advertising professional, it has never been missing in the first place.

He grew up poor, his extended family of 10 people squeezed into a three-room flat in Stirling Road.

At school, a teacher noticed his creative leanings and suggested he do Creative Design at Temasek Polytechnic; he has not looked back since. Now, he serves as Vice-President of TribalDDB Asia as well as its Singapore head.

He, however, has not forgotten his roots. Mr Cheong, one day, found he had time to spare after lunch at Bendemeer. Wandering around HDB blocks, he was puzzled to find mailboxes fitted with LED displays on top.

He later discovered that these were to alert passers-by should an elderly resident, many of whom lived alone, hit the emergency button installed in their home.

He got his co-workers to pool together some money to buy supplies and, armed with about 50 bags, went back to the flats with colleagues and family in tow. Knocking on random doors that first visit, to head any unease, they introduced themselves to the elderly residents with: “Hi, we are your new neighbours and we’re just here to say hello.”

That visit had such an impact, his office has continued the tradition for the past three years.

“It is a little more organised now. We work with Lions Befrienders which gives us a list of units whose residents need more attention.”

Another time, he was driving his friend home when a lady collapsed on the road in front of them — from stress and hunger, he later discovered.

Shocked and worried, he drove her to Parkway East Hospital before sending his friend home, then went back to the hospital to check on her.

He later drove the lady and her friend home, too.

A question about whether he gave much thought to such acts of kindness actually catches him by surprise.

“I do not think about them,” he admits finally.

But he is a believer that acts of “kindness and graciousness” create a small ripple which keeps growing — “from home to neighbourhood, to society, to country and then to the world”.

The Singaporean of the Day project was conceived out of Mr Cheong’s indignation with last November’s Gallup survey results, which declared Singaporeans to be the unhappiest and most emotionless people worldwide — beating out countries such as Iraq, Serbia and Nepal.

Perturbed, he looked closer at the survey and declared the questions and methodology “nonsensical”.

“Sample size of 1,000? That’s enough for you to say that (we) are emotionless? And questions like, ‘did you smile more than yesterday’ — I mean, how do you extrapolate that kind of thing? It could have been a bad day with a colleague or boss. It’s my current state of mind versus my entire month or year of thinking. I thought it was pretty unfair.”

He was incensed because, it was, as if “someone were to come to your house and say: ‘Hey your house is damn ugly’. It is almost like an invasion … I felt it even worse when the headlines (in the international media) were really sensationalised.”

This became a hot lunch topic with his colleagues, and they discussed the issue over and over.

“It all came to a point where everyone (knew) at least one person, chao chao (for sure), doing something different. Some guy pursuing his own happiness. Some very happy, some very normal, but at least someone who is keeping the faith, believing that they are proud to be a Singaporean.”

It did not take him and art directors Lim Si Ping, 25; and Herbert Pradjaja, 26; and producer Jasmine Moh, 29; long to hit on the idea and name: A video site showcasing real Singaporeans, every day.

Mr Cheong did a search and discovered the website name was yet unclaimed. “I said eh! Singaporean of the Day is not taken! Quick, quick, quick!! Let’s apply!”

The goal was simple — to show that Singaporeans are anything but emotionless and unhappy. So far, 14 Singaporeans from a wide range of backgrounds have been showcased.

Using two SLR cameras and a microphone, the first person they filmed was Mr Lee Yoon Tong, 74, one of the last remaining street-alley barbers in Singapore, who had interesting tales of his 50 years in the trade.

“We deliberately chose someone who was slightly older, so we could set out with how we can learn from the past and have it take us to the future. The story was incredible and he was very candid,” said Mr Cheong.

That, he said, was the easy part for a team with almost zero experience with editing software. They ended up spending “so much time” in the editing room that one of theme joked they should change the name. “He said: ‘Jeff, maybe we should call it Singaporean of the every other day, or of the week, or even of the month.”

In the end, they settled on aiming to upload a new video every three weeks instead of the ambitious earlier goal of doing so daily.

The site started small — they asked a few friends to spread the word if they enjoyed the video. Then the emails, praise and suggestions for new interviewees began to flow in.

When a potential subject is nominated, the crew arrange several meetings so that both sides can feel each other out before filming even commences. Sometimes people back out, or the team decides it would not be a good fit for the website. This, he said, is because “we want to make sure the people we feature are leading authentic lives.”

Once comfortable, the crew sets up a date to film. “It’s very natural … We let the camera roll and they will just talk and talk and talk. We don’t give them a script or questions beforehand.”

The crew are invariably touched by the individuals they meet. Said Mr Cheong: “Whenever we film, our hearts beat very fast and we leave feeling very inspired.” The concept of the videos has proven so effective that copycats have surfaced — which Mr Cheong said he fully encourages.

Some of the Singaporeans featured on the site have also received a boost. After Ms Poon’s video went live online, a stranger asked Mr Cheong, through Facebook, if her book — a non-profit project meant for caregivers and young cancer patients — was available in China. The person knew a publisher there and so, someone was found to translate the book, and it was sent off, artwork and all, to be made available free in China for those who needed it.

The project is a personal one, for the four TribalDDB colleagues, they film during lunchtime or at weekends — though their understanding mentors and bosses, Chief Executive Officer David Tang and Chief Creative Officer Neil Johnson of DDB Group, “close both eyes” when they overrun their lunch hour because of filming, said Mr Cheong.

It is probably because he works hard and efficiently. Every morning, after dropping off his eldest son (he has two sons, aged 9 and 3, and a daughter, 7) at school, he is in the office by 8am, an hour before anyone else.

His team is a close-knit one, so much so that, at the start of the interview, one staff member emailed to update him that she was going in for a Caesarean to deliver her baby.

And while many creative and advertising agencies are stocked with foreigners, Tribal is “over 90-per-cent Singaporean”, Mr Cheong said proudly. He hires locals where possible because he believes “there is talent here”.

A family man, he tries to rush home by 7.30pm to have dinner with his family. He also believes in teaching his children to be hands-on, especially in being solicitous of the needs of others.

Once, he spotted a blind man with a guide dog trying to find a place to sit. “I told my (elder) son to go and guide the dog while I watched. He was a little afraid as it was big” — but the little boy not only helped the man, he also noted the condition of the seat and yelled out: “Daddy! Got tissue? The chair is wet!”