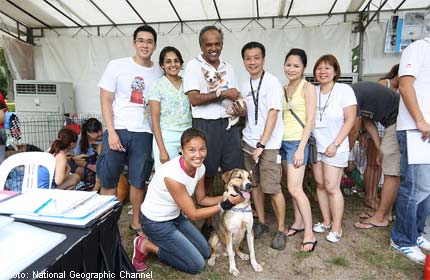 More than 6,000 people and 450 dogs flocked the beaches of East Coast Park over the weekend at the National Geographic Channel (NGC) Free Pet Shop, which featured about 100 dogs up for adoption.

Into its second edition, this initiative by National Geographic Channel echoes recent developments by the Animal Welfare Legislation Review Committee (AWLRC) to improve animal welfare in Singapore as the event continued to rally the community of stakeholders together.

Over the weekend, shelters Action for Singapore Dogs (ASD), Animal Lovers League (ALL), Gentle Paws, Noah’s Ark and Save Our Street Dogs (SOSD) observed an increased number of 270 interested queries, a 35 per cent rise from last year’s.

A total of 270 bowls of food from Purina were pledged by members of the public to feed the dogs at their choice of shelters,

Interested dog adopters were spoilt for choice with more than 100 dogs across five shelters to choose from.

Fly Entertainment artistes Karen Lim, Magdalene See and Andrew Lua, as well as Law and Foreign Affairs Minister K Shanmugam were also seen at the event doing their bit to advocate the cause for dog adoption.

Said Karen Lim, “Adopting a dog changed my daughter’s life. She went from fearing dogs to one who loves animals and is now trying to convince us to adopt another dog because she wants to care for them.”

Ms Allison Mcelwea, 37 years old, said, “It is really great to see that Singaporeans have so much love to give to their canine companions. I have adopted dogs previously and realised they are much more stable in behaviour, and they have been conditioned to interact well with young children.”

Said Mr Ricky Yeo, President of ASD, “I am heartened to see the community of stakeholders who are involved in the welfare of dogs and other animals step up in efforts to help re-home our dogs. Dog owners, industry experts, pet service businesses and large corporations have contributed significantly to the increased awareness of the adoption campaign. I am hopeful that with these continued support, more can be done for stray dogs in Singapore.”

Dr Siew, president of SOSD said, “This is our first major outing to promote dog adoption and it will certainly not be the last. It is a great community outreach event for us to help re-home as many of these furry friends as possible.”

Ms Sharon Tang, a long-term volunteer at animal shelter Noah’s Ark added, “It is encouraging to see an equal number of queries for both small dogs and local crossbreeds. Besides interested adopters, there have also been many individuals who showed interest in our fostering programme.”