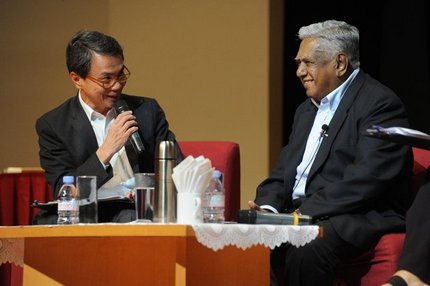 “Problems will always be there. You can always throw money but that will not be the solution,” he said as he urged more Singaporeans to give of their time and effort as volunteers to help those in need.

Speaking at a dialogue for the National Council of Social Service on Thursday at Biopolis, the 89-year-old former head-of-state said those involved in social services — professionals and volunteers alike– need to be involved for the right reasons.

“We are not in this business to get to be known, whether people know us or people do not know us, our mission is to save lives,” said the former president who’s had a lifelong passion for social welfare.

Volunteers should not be driven by recognition but instead have the genuine willingness to help, he explained.

“Faith in what we do is very important. Sometimes you feel hopeless, you feel no hope at all,” he says. “In the things that we do, we carry our problems home, we don’t finish it at 5 o clock.”

Nathan knows all too well about hardship despair.

As a child, he had run away from home, slept hungry on the streets, faced the tragic death of his father and been kicked out of school twice.

His turning point came during World War II when he picked up an English-Japanese dictionary and became a translator and interpreter, eventually working for the top official in the Japanese civilian police.

“For the first time, I was told by somebody that I had a good head, and that encouraged me to learn Japanese.”

The resilient man was eventually able to turn his life around from depths of human despair to eventually to become President of Singapore, taking over former president Ong Teng Cheong on 1 September 1999.

As the longest serving president in Singapore, he stayed in the job for eight years until last September, when he stepped down to be replaced by Tony Tan.

Having gotten out of a bleak past, Nathan hopes more people participate in social services to help others see a brighter day as well.

That is the very reason why he inaugurated the annual President’s Challenge.

“One of the reasons I started the president’s challenge is not for the money but for the participation,” he said. “I want to get people conscious about other people’s problems.”