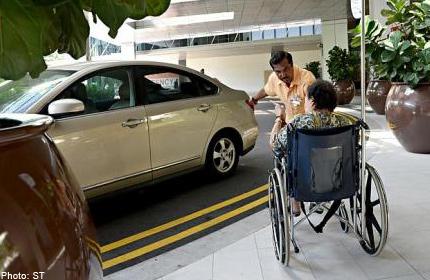 A move to keep senior citizens active has spawned a befrienders programme that could pave the way for more elderly patients to get home visits from people closer to their age.

The programme is now on trial, with 12 volunteers accompanying nurses from Khoo Teck Puat Hospital to visit its newly discharged elderly patients.

Called RSVP Ageing-in-place, it is named after the Organisation of Senior Volunteers (RSVP), which is providing the volunteers.

Its goal is to complement the role of nurses during these home visits and provide emotional support to the elderly patients.

Before they go out, the volunteers are trained on, among other things, how to handle patients.

Besides helping nurses in some of their basic duties, the volunteers also remind the elderly patients to take their medicine.

“With seniors helping seniors, communication is better as the age gap is bridged, said Mr Koh.

Its four-month trial will end in July, and the organisation is targeting to have between 50 and 100 volunteers should the programme proves successful.

“We are stepping up our activities and with the support of the National Volunteer and Philanthropy Centre this year, we are hoping for a bigger turnout,” said Mr Koh.

The volunteer week will also include a programme to refurbish old computers to give to the needy in Singapore, and an open house at the organisation’s office in Bishan.