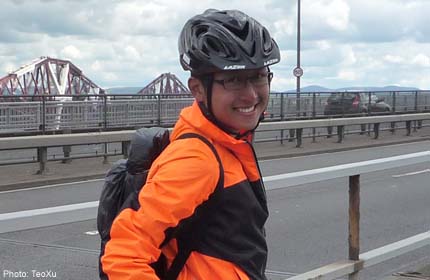 The intrepid 27-year-old, who is raising money for needy children, will cover about 20 times the distance from Jurong to Changi by the time he is done.

Along the way, if all goes according to plan, he will pass cities such as York before completing his walk next Sunday.

The project started off as a personal challenge, but Mr Teo later decided to use the experience to raise money for needy children around the world.

The student, who is studying ecological science at the University of Edinburgh, told The Straits Times by e-mail: “This is the first time I will be walking such a distance, but it will be for a worthy cause, and I am so fortunate to have the support of my family and friends. I wanted to do it alone as it’s meant to be a personal challenge and a self-discovery trip.”

He said he chose to help children because they “need the most help – they are the most helpless and vulnerable”.

The sports enthusiast is no stranger to feats of long-distance endurance. Two years ago, he and a friend cycled around Scotland, covering 1,100km over 15 days.

Even so, he spent five months training for this latest journey – running and going to the gym at least four times a week. During the trip, he will use walking poles for balance and to relieve pressure on his knees, covering about 80km over 16 hours every day.

Although he plans to sleep mostly in bed-and-breakfast establishments, he told The Straits Times: “Some of my friends will be driving down to cheer me on during the last few days, so I think I’ll sleep in their cars too.”

To keep himself going, he is carrying electrolyte tablets for hydration, extra water, food, and batteries for his mobile phone.

Mr Teo, who enjoys cooking, singing and playing the ukulele, said: “I think the most obvious challenge will be how to fight the fatigue and, of course, the blisters.

But it’ll be more of a mental challenge than anything else.” He is confident of overcoming the challenge – an attitude he credits to his army days.

“I learnt about my limits and ability to push beyond what I thought I was capable of. Recognising that ability is a powerful tool, and it will definitely be vital in overcoming the odds when the going gets tough.”