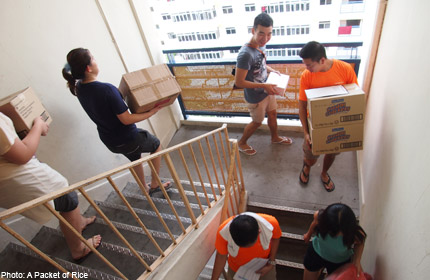 Growing up in Bukit Merah, Mr Vincent Goh could never erase the memory of the many elderly poor living in the rental flats in his neighbourhood.

Nine months ago, the 32-year-old events manager, who now lives in Yishun, decided to make life a little better for some of them.

He founded “A Packet of Rice” with four friends and, using Facebook, they have attracted donations and 100 volunteers to help distribute food packs to needy senior citizens in his former estate which, he said, “I began to miss as soon as I moved away”.

Similarly, singer Elson Soh was moved by the needy old people he saw and met at his performances and community events. “I wanted to do something on my own to help people who fall through the cracks,” said the 25-year-old.

Like Mr Goh, he used Facebook to appeal for donations and volunteers and today, has 500 people on tap to help distribute food and household appliances.

“I don’t think it’s true that Singaporeans are ungracious. Many want to help and most of the volunteers are first-timers,” he said.

Social media has helped both groups raise a mound of cash.

Mr Goh, who had lived in Bukit Merah for 28 years, received more than $38,000 in donations. With $17,000 still in hand, he has stopped collecting money for now. He also caps the number of volunteers going out each time at around 40 “so that the senior citizens are not overwhelmed”.

The seniors are given a packed lunch, fruit, a packet drink, biscuits, buns and bread.

Who they help is worked out with welfare organisation Sarah Senior Activity Centre, which looks after the welfare of senior residents in the area.

In recent months, the group has done more than give food. In April, they organised a portrait photography session for 30 seniors.

Last month, they took 34 of them on an excursion to places such as Merlion Park and Mount Faber. They also embarked on their first “home makeover” for a 93-year-old known only as Madam Koh, who lives in a one-room rental flat.

Ten volunteers cleaned and re-painted her home. Said volunteer Rae Tang, 33, a marketing communications manager: “It’s easy to get people to donate money, but not many would want to spend their Sunday morning doing physical work.”

At Project Awareness, volunteers made 10 distributions across the island to people living in one-room rental flats. About 1,500 meals have been given to the needy in such areas as Pasir Ris, Bedok, Woodlands and Dakota.

Donations of food and household appliances worth about $20,000 have poured in in less than three months, said Mr Soh.

“When I started, I didn’t realise it would need so much money. But I think when I help, I should go all out,” he said, adding that his income is derived mainly from endorsement deals and sale proceeds of his song albums and concert tickets.

The group works with centres like THK Bedok Radiance Senior Activity Centre and Tung Ling Elder Care to come up with its list of the needy.

Through referrals, knocking on doors and news stories, they have also identified more than 50 families in need, such as those suffering the loss of a breadwinner or saddled with medical expenses they can’t pay. “We want to give them hope and help them solve their problems,” said Mr Soh.