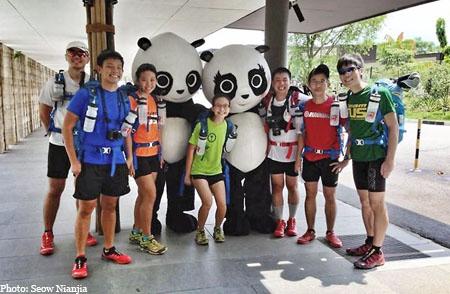 These undergraduates are pushing their walking limits to raise money for poor students and their families.

The seven undergrads and lecturer DrKelvin Pang from NUS’ Tembusu College are embarking on a 250km march through the Gobi desert to raise funds for The Straits Times School Pocket Money Fund.

One of four annual desert races, the Gobi March will take place over seven days, from today, in harsh conditions.

All the eight members of the team had never experienced such a challenge before, but the training was particularly painful for one of the two women, Miss Tan Pei En, 21, who considers herself as one of the weaker members.

“It was very, very tough and painful… My body wasn’t used to the stress that I was putting it through,” she said.

Although she runs regularly, she had never experienced such a demanding routine.

“The toughest part of training was the fact that I am a lot smaller than the other members so I had to work extra hard to keep up with my teammates.

“One stride for them is equal to two strides for me, so I had to constantly try to catch up.”

Keeping up is important because one of the rules of the march is that the first and last team member cannot be more than 25m apart.

The team’s physical preparation started eight months ago, with team trainings every Saturday.

Mr Seow Nianjia, 28, one of the two student leaders, said they trained “whatever the weather conditions on training days”.

He designed the training plan for the team, which hopes to raise $100,000 for the fund, which benefits needy children and their families.

The team typically did a half-day trek of up to 20km every Saturday at MacRitchie Reservoir or Bukit Timah Nature Reserve.

Long hikes were also part of their training, with each member carrying loads of up to 10kg while hiking for 40km over eight hours. For the real march they will be carrying about 13kg each.

In all, the team has trekked about 400km over four months, excluding individual training.

Mr Seow’s co-leader, Mr Frank Liauw, 25, said he ran up to 21 km at least three times a week for his individual training.

Climbing up stairs was also a vital part of individual training, to build up each member’s stamina.

Although the team did not complete a full 250km practice trek, they have hiked for 80km over two days.

Miss Tan said: “Injuries start coming up after training as the most I’d run (before the training started) was 5km. It was worst during the 80km trek. I’ve never had so many injuries before.”

After that trek, she had injuries to her ankle and blisters.

Two members have been trained in basic first aid, as parts of the rugged march will leave the participants with delayed or a complete absence of medical attention.

Mr Seow said: “The most important thing is to take care of our own personal safety.”

You can donate by cheque to The Straits Times School Pocket Money Fund (SPMF), but include a note to say that it is for the Gobi March.