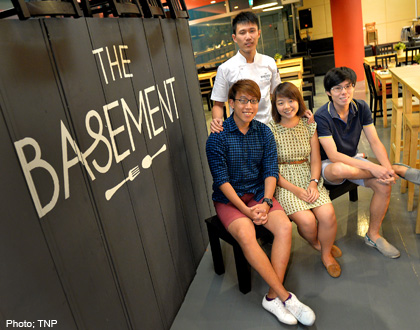 When they first started a cafe selling Western food last August, the five undergraduates had to struggle between running the cafe and attending lessons.

“There were times when one of us had to skip class because we needed to be at the cafe,” Mr Lee Jia Wei, 24, said sheepishly.

Along with four others – Miss Joanne Hoe and Miss Sharon Lim, both 22, Mr Marcus Wong, 24, and Mr Poh Jiawei, 25 – he started The Basement at the Singapore Management University (SMU).

The cafe is a social enterprise aimed at helping the disadvantaged.

It took the group, all business students going into their final year except Mr Wong who is doing economics, one semester to figure out how to balance their schedules.

Mr Poh said: “We now bid for modules that won’t clash so at least one of us would be here at any time.”

While the five founders would still be at the cafe every day, there are two full-time employees working in the kitchen and five part-time servers.

The space they occupy is on a two-year lease from the SMU Student Life Office which offers the area at a “supportive rate”, said Mr Lee, who doubles as the chef.

It is also a way for them to give back to society, having met in 2011 during a community service project in Thailand’s Chiang Mai province, where they built a football field for an orphanage and taught English to children.

They now run a soup kitchen nearly every quarter, with the first being for SMU’s cleaners to celebrate the Winter Solstice (a Chinese festival) last December.

“We only have this place for two years, so there’s only so much that we can do. We want to make the best of it while we’re here,” Mr Wong said.