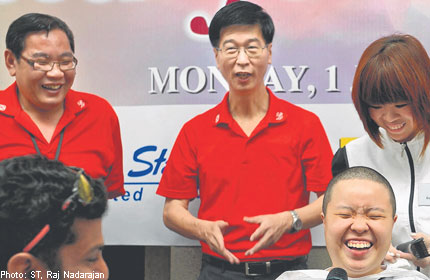 Ms Dai Yifang knows people will stare when she walks down the street with a totally bald head – but does not care.

The 26-year-old was the only woman among 23 People’s Association (PA) staff members who had their hair shaved off yesterday as the organisation took part in the Hair For Hope campaign for the first time.

It raised $8,612 for the Children’s Cancer Foundation which will benefit young sufferers.

“I want to understand and see how they actually feel psychologically,” said Ms Dai, a constituency manager in Boon Lay. She considered pulling out at the last minute but was encouraged by her family and colleagues.

She said she had been thinking of doing this for two years now, and “decided to come on board when the association had this”.

Mr Joe Sim, 32, was a fellow first-timer but admitted it was a bigger sacrifice for women. “After all, at some point in our lives, every male Singaporean had to go bald right?”

He said he was inspired to take part to set an example for his two young sons. “I want to show them that losing something but benefiting somebody else in society will be good after all,” added the senior manager in the active ageing and family life division.

PA’s staff club chairman Tok Hock Soon came up with the idea and the association’s chief executive director Ang Hak Seng, who is also president of the staff club, was on hand yesterday to support his “brothers and sisters” – though his own head of hair remained untouched.

He said they had made “a very big personal sacrifice”.

Mr Tok confirmed that participating in Hair For Hope will probably become an annual event for PA: “Maybe next year, we’ll do (it on) a bigger scale and probably raise more funds for the children.”